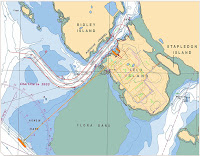 The main purpose of Mr. Good's travelling caravan to the North was to further explore the prospect of LNG development in the province, with the North Coast seemingly destined to be the shipment point should those plans ever fully develop.

The day's programming began at 8:30 with Energy Minster Rich Coleman providing the overview of development from the Liberal Government's point of view.

The 11 Am to 11:45 AM aspect of the show provided for a further review of the proposed LNG projects, more project intensive than the day's previous discussions.

Guests for this half  block were former Mayor Herb Pond representing the BG Group and Greg Kist of Petronas.

The half hour began with Mr. Good reviewing a phone call from the previous half hour and fears that the resource of natural gas would run out and that demand would strip the supply.

Mr. Kist offered up a overview of the state of the industry at the moment, advising of the requirements in place to serve Canadian needs first and then meeting the terms of any export license that is granted for their project.  He outlined some of the untapped regions of Western Canada from which Petronas is looking to bring gas to market.

The topic of fracking was discussed, as well as the nature of the NDP concerns over that process of development.

More to the topic of Prince Rupert's part in the process, the timeline of development of the Petronas plans for Prince Rupert was discussed in the first fifteen minutes of the block.

Herb Pond was the guest for the second fifteen minute section, discussing the nature of the BG/Spectra bid for the region and how he believes the prospect of development will make for a resurgence of the local economy.

Mr. Pond was asked to speak to the topic of LNG and the challenges ahead to provide information on the projects and the prospect of its impact to the region.

He offered up a bit of a review of when he was Mayor of the community and how the idea of LNG development was just the kind of item of a far off future, now a little closer than it was back then.

Mr. Pond and Mr. Good then engaged in a wide ranging discussion on the nature of the economic split between North and South in the province and how development in the Northwest might perhaps help  in stemming the exodus of youth from the communities.

It was a conversation that examined a growing confidence in the region and offering the prospects ahead for opportunity for work and lifestyle options luring others to the region.

Mr. Pond was asked to look ahead to the next five years and what he hoped to see in the community in that period of time.

He discussed the need to build a robust economy and provide for a lure for whole families to relocate to the community, a process that would add to the aspect of growing the economy and providing for services to it.

The concept of development with balance was discussed in the final moments of the section, with Mr. Pond suggesting there was a path to develop industry while still protecting the nature of the environment in the region.

With the show heading into its final half hour the fifteen minute block from 11:30 to 11:45 focused on the much discussed Prosperity Fund recently introduced by the BC Liberal government.

The nature the projections of the Liberal Government and that of the proposed tax on LNG that the Premier discussed were examined.

The projections for five LNG plants on the North Coast were also reviewed, with concerns that the nature of the task ahead and the timeline in place could make the current numbers of planned projects rather optimistic.

The guest for the fifteen minute block was Dave Collyer, the President of the Canadian Association of Petroleum Producers, who expressed concern over the Premier's taxation thoughts.

When asked for the timeline of development for the North Coast, Mr. Collyer advised that his organization believes there is a window of opportunity, but it's a short one, with the need to have infrastructure in place sooner rather than later.

His group believes that the first of the developments could be in place within five years.

A discussion on the nature of the global competition for LNG development followed with the competition coming from as far afield as the Middle East to Australia.

You can review the LNG portion of the day's broadcast through the CKNW Audio Vault and their Podcast Portal.

For our archive of past items on LNG development click here.
Posted by . at 1:14 PM