With a Winners Opening for Terrace, a road trip beckons for North Coast residents 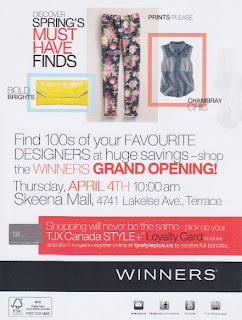 A turn of nice weather anticipated for next week along with a flyer that arrived in the mail this week, will most likely having more than a few Rupertites ready to top up the family automobile for the leisurely cruise down the road to Terrace.

The long awaited arrival of Winners to Terrace is set for next Thursday, with the Grand Opening of the latest store in the Canadian chain ready to open its doors in the newly refurbished Skeena Mall.

The store is the latest of name destinations to find their way to Terrace,  joining the recently opened Sportchek which will no doubt be hoping to fill the void for Rupertites created by the recent closure of the Athlete's World store in the Rupert Square.

And while there is some light on the horizon for the local commercial scene, with the recently arrived Wal Mart and the soon to return Fields, the scope of the lure of Terrace continues to grow as the commercial class for the region seems to be building upon the footprint of the Terrace Wal Mart, Canadian Tire, Real Canadian Wholesale and Staples stores to name a few. 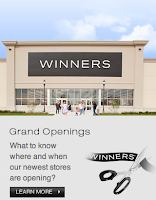 Prince Rupert seemingly is having troubles in building its image with the main Canadian chains of late, while Terrace it would appear, is on the national commercial sector radar, benefiting from it's location and the ready access to Prince Rupert, Kitimat and Smithers.

With the once upon a time plans for that Shopping Village on the highway now but a memory and the Rupert Square still counting almost as many stores closed, as there are open along its promenades, the Terrace merchants will be looking to cash in on the attraction of those chain stores that have decided that Terrace is where it's at.

It's always a popular topic in Prince Rupert about that wish list of commercial options that locals would like to see here, but if Council has been seeking to redress the shopping deficit between the two communities of late, they've been keeping their efforts pretty quiet.

From recent council sessions we are left with the thought that the City Council believes that the economic turn around is but a few years away, at which time maybe the city's diminished commercial sector may once again spring back to life.

Last year the Mayor was heralding the positives and the prospect of a more vigorous commercial class.

But so far,  it's been pretty slow going in the world of providing a variety of shopping options, particularly when compared to the neigbhours down the road.

For the moment and as it has been for more than a few years now, it seems that with the addition of yet more shopping options in Terrace, spring and summer will be shopping season for North Coast residents and most of that shopping will be taking place an hour and half to the east.

You can review some of the past the Northwest shopping developments and options from our archive on the topic.
Posted by . at 6:52 AM

Email ThisBlogThis!Share to TwitterShare to FacebookShare to Pinterest
Labels: More shopping slip off to the east, Winners set to open in Terrace