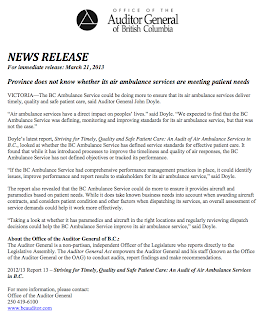 “Air ambulance services have a direct impact on peoples’ lives.” said Doyle. “We expected to find that the BC Ambulance Service was defining, monitoring and improving standards for its air ambulance service, but that was not the case.” -- A portion of a news release from Auditor General John Doyle delivered with the release of his report into the province's Air Ambulance Service.

They are a familiar sight in the sky over Prince Rupert, the BC Air Ambulance Service and its aircraft providing for a lifeline for many in the province.

And while many don't think twice about importance of the service that they provide, at least one person is a little concerned over the oversight that they receive from head office.

In a report released on Thursday, the Air Ambulance Service  found itself under the microscope of the soon to be departing Auditor General John Doyle.

And his findings that the service could be doing its job better, might  very well make for another election issue in the campaign to come.

Prince Rupert in particular relies on the Air Ambulance service more than many other communities, mainly to transport patients from outlying areas to our Regional Hospital and for transport from Prince Rupert to major health centres in Vancouver.

So local residents may have more interest in his report than other communities that aren't as dependant on the Air Ambulance service.

In his report delivered on Thursday, Doyle found a number of items of concern regarding the administration of the service, including:

A lack of goals for the Air Ambulance Service

A lack of consistent procedures for reporting and addressing safety issues

It is unable to demonstrate whether it is providing timely, quality and safe patient care

Did not adequately Track or monitor clinical activity

Has not accurately measured transport timeliness

To that end the Auditor General's office provided three key recommendations for the Air Ambulance Service to make progress on.

1. Actively manage the performance of its air ambulance services to achieve desired service standards for the quality, timeliness and safety of patient care.

2. Periodically review whether the distribution of staff and aircraft across the province is optimal for responding to demand for air ambulance services

3. Regularly identify and review a sample of air ambulance dispatch decisions to ensure resources are allocated with due consideration for patient needs and available resources.

A seven minute video summary of the report can be found below as posted on the website for the Office of the Auditor General.
.
.


.
.
The Office of the Auditor General website also provides a link to the full report which is available for download

The Auditor General did observe, that the BC Air Ambulance service had accepted the recommendations.

The Air Ambulance service said Thursday, that it is taking steps to implement the recommendations, with an eye on the audit to further enhance its operations.

Some of the media reviews of the Thursday report can be found below.