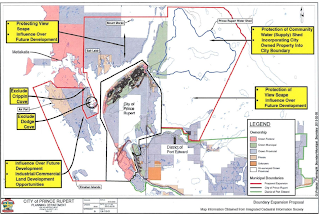 Prince Rupert City Council is looking in every direction and seeing land, land that it appears the City believes should soon be within it's boundaries and one day perhaps, providing opportunity and revenue for the City of Prince Rupert.

As part of Monday's City Council Session, The Mayor and Councillors will take a look at a comprehensive report (and a number of maps like that above) compiled by staff, explaining the benefits to the City of expanding its boundaries and taking in much of what surrounds the main city footprint of Kaien Island, the majority it under the Federal or  Provincial ownership of the Crown.

(Relax residents of Dodge and Crippen Cove, we apparently shan't cast a covetous eye on your holdings)

The Introduction to the Proposal, outlines some history on the City's growth patterns through the years and provides a nod to what the City considers to be a bright future.  The main testimony to that future, a key paragraph of explanation as to what the City hopes to gain from the expansion of civc boundaries, the last line of it perhaps the most important of them all.

The future looks bright; new industries, employment, economies all point to a gain and as new development occurs, expectations from local government grow as well. On the other hand, we need to manage sustainable development, to protect the essential quality of life and to manage orderly development with good municipal regulations and to gain tax base from the anticipated development.

The full review, including maps, of each possible new territory can be found on the (City Council Agenda for March 11th, pages 37 to 46).

It will no doubt make for much in the way of conversation at Monday's council session, as the City's representatives put on their land speculator hats and start to organize their land stakes to go scout some land.

You can review City Council's discussion of the Boundary Expansion proposal from our City Council timeline feature for March 11 (53:00 miunte mark to 1 hour 10 minute mark)

The City has provided for a webpage on the City website to further explain their boundary expansion plans, you can view it here.

Email ThisBlogThis!Share to TwitterShare to FacebookShare to Pinterest
Labels: City of PR looks to expand it's boundaries