The NCAA regular season is about to come to an end for the Western Michigan University Broncos and as the team takes to the ice tonight and Saturday in its final regular season games, Prince Rupert's Frank Slubowski will again be a familiar sight in the Bronco net.

With the Bronco's off to East Lansing to take on cross state rival Michigan State, the familiar tap on the back will come to the PRMHA grad as he leads the Broncos in their final weekend of hockey until the playoffs.

Slubowski has started in 52 consecutive games for the school, a streak which dates back to January of 2012 and if the words of head coach Andy Murray are any indication, that streak will have a ways to go yet for the guy they call "The Big Lebowski".

As a twitter note outlined last night, history could be made this weekend as Slubowski could be only the second goalie in the school's history to start every game in a season. 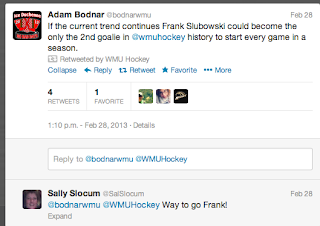 Murray clearly has confidence in the product of the Prince Rupert Minor Hockey Association and with the Bronco's currently ranked eighth in two US college polls, the prospect of some playoff hockey and maybe a berth in the famed Final Four may be within the Broncos' grasp.

Towards that march towards the US College championships, the Broncos will gain a bye in the first round, giving the team ample opportunity to rest and prepare for when they host playoff hockey in the second round.

As for Slubowski, this season is proving to be a break out year for him, in addition to the success he's finding with the Bronco's his work has gained notice on a national scale.

As we've mentioned on the blog before, he's currently in the running for votes for the Hobey Baker Award process.

He currently has 8,352 votes in on line balloting so far, you can cast your ballot here to try to propel him on to the next phase of the Hobey Baker process.

The first round balloting will come to an end on March 10th.

Earlier in February, the M Live news service had this look at the reliance that the Bronco's are putting on Slubowski moving towards the end of the regular season and on to the playoffs.

Full coverage of the Bronco's season heading towards the post season play can be found here.

You can find out more about the WMU hockey program here.
Posted by . at 3:01 PM