For the Charles Hays Rainmakers, another shot at a return visit to the AAA provincials final will have to wait for the returning players of 2016.

Friday afternoon, the Rainmakers ran into a bit of trouble by way of a  pretty impressive team from East Vancouver, in a tough but entertaining semi-final showdown at the Langley Events Centre.

As the highly anticipated meeting between the teams by name of Charles, in the end went the way of the squad Sir Charles Tupper.  With the Tigers putting on a display of basketball mechanics that served them well through the late afternoon match up.

Through much of the play of all four quarters, the Tupper Senior Boys offered up some pretty solid evidence as to the hard earned placement of their number one status of the tournament. With the Tigers claiming a 63-40 victory over the Rainmakers and booking their dance card for Saturday's AAA Tournament Final.

For the Rainmakers who jumped out to a quick start on the afternoon with an early 6 to 0 lead, the first quarter provided some fast paced, end to end basketball, as the two teams traded off opportunities and made the most of the chances that good ball distribution would provide for.

Charles Hays rained some long balls down on the competition in the first ten minutes, using a string of three point shots to keep pace with Tupper, trailing the Tigers by only two points as the first quarter came to an end.

The second frame however was the point where the East Van team began to build up its lead, putting points on the board and denying the Rainmakers the chance to answer, Tupper adding to their totals to take an imposing ten point lead into half time, 35-25.

The third quarter key for Tupper was their ability to shut down the Rainmaker attack for large stretches of the period, adding points when opportunity arrived, creating what in the end was shaping up as an insurmountable 52-37 lead by three quarter time.

A strong zone defence and dedication to holding their positions forced the Rainmakers to take shots from the periphery of the Tiger end of the court, leaving little of the way for clear looks and sending much of what was launched to rattle off a back board, or ding away off the rim harmlessly.

With a fifteen point bulge heading into the final quarter, Tupper would slow the game down significantly for the final ten minutes. Denying the Rainmakers the ball for significant portions of it and from that, shutting down the option of putting together a strong push back.

Showcasing a combination of ball control and clock management, the Tigers made time the clear enemy for Charles Hays as the final ten minutes worked their way down.

Not surprisingly, much of the focus for Tupper through the game was on the Rainmakers Justin McChesney, as the Tiger defence at times had two and in most instances three men collapsing to wherever McChesney was with the ball.

A successful defensive scheme that removed the space required for the Rainmakers big man to work with and limited a lot of his ability to dish the ball out.

On those occasions when Charles Hays would find a crack in the Tupper defence, the short lived windows of opportunity would pass by with little success, as shooting hands went cold, or balls skipped around the rim but refused to drop.

Tupper shut things down tight for the final four minutes of play, holding the Rainmakers off the score board, while adding five more points of their own, going on to secure their spot in Saturday's final against  Fleetwood Park . 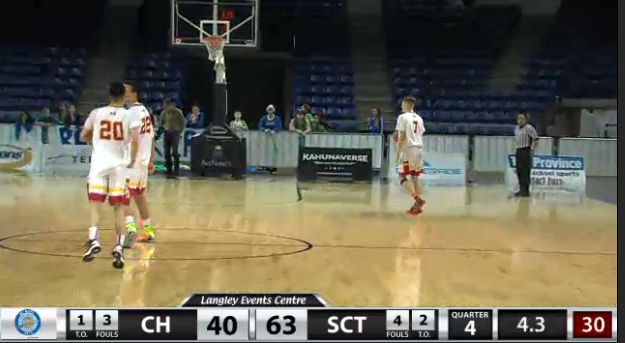 Top point getter for the Rainmakers on Semi-Final Friday was Rosendo Masocol with 14 points and 4 rebounds, Justin McChesney found net for Charles Hays for 10 points, with 15 rebounds on the afternoon.

Charles Hays won't have much time to refocus from Friday's tough battle, as the chance to secure a third place finish in the Provincials arrives late into Saturday morning.

That's when the Rainmakers meet up with Richmond's R. A. McMath in the final tournament appearance for both squads.


Some media notes on the McMath squad can be reviewed below:

Game time updates and background on the Rainmakers can be found on the CHSS Sports Twitter feed.

For past stories from Tournament week and updated notes on Saturday's final action, see our Tournament Results Page here.

As, well to review the Rainmaker season leading up to Saturday's tournament wrap up, see our Rainmakers Archive page here.