March 10th, for many in Prince Rupert it probably is just another one of those numbers on a calendar, closing in on the midway point of the month, the promise of spring just around the corner.

However, for fans of history, March 10th is to be remembered as pivotal day for the City of Prince Rupert, one which set the course for the future for those that would make their way to the North Coast in the years to follow.

And while First Nations have had a much longer time of residence across the region, providing a dynamic history of the Northwest that goes back much further into time, the Prince Rupert that we know today, came into being on March 10th, 1910.

105 years have passed since the City of Prince Rupert was incorporated, the town site carved out of rock and muskeg all part of the expansion of the Grand Trunk Pacific Railway, the start of the role that the rails would play in the city's future through one century and into another.

The ink was barely dry on the incorporation papers before Rupertites were off to the voting booth, delivering Alfred Stork to his office as Mayor on May 19th, 1910.

One wonders what Mayor Stork would think today of the town that he was there to launch, boom times and busts have come and gone. The Fishery was once king of all industries, then a pulp mill, times changed and Prince Rupert had to reinvent itself at many turns of its history.

With those shifts in our industrial base, the population count through the years has offered hope of a surge and as we are all too aware today, fallen significantly as well.

Yet in Prince Rupert, the promise of the future and better times seemingly is always around the corner, always the topic for discussion and examination.

105 years later, the vision of a giant port on the western coast of North America is much closer to the blue print that a fellow named Charles M Hays may have had in mind when the Titanic took the town's main champion to his fate.

The attachment to the railroad remains key to the city's future today, as much as it was in 1910.

Founded as a railway terminus, today the ambitions are still very much the same as they were when the Grand Trunk Pacific Railway folk rolled into town, the development of a major port city and with it an urban area to rival the others up and down the continent

The port seems closer to that goal than the city at the moment, but hey, we're still young, there's lots of time to work on Part B.

The City hosts a short synopsis of the town's creation on the city website.

A journey to the Library will also provide from some excellent background on both the early days and the more recent history for the region. 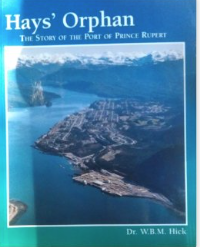 Among some of the historical references you may find are a pair of books from local historian Dr. Large, who offered up some of the first of the in depth overviews with his series of books Gateway to Alaska and the follow up second companion to the series

One time Daily News correspondent/commentator/editor Phylis Bowman's has many reviews of the early times of the North Coast to be found on the shelves as well, the work from the long time North Coast resident who passed away in 2012 a timeline of sorts as to how the area evolved.

And then there are the more recent historical reviews of Hay's Orphan and Canada's Pacific Gateways from Dr. Hick, which provide colourful accounts of how Prince Rupert emerged out of the muskeg in 1910 and the impact of the Port on the future ahead.

The prince Rupert City and Regional Archives Society also produced their own historical review, Prince Rupert an illustrated history which is also available for the history detective in you.

Many may still be available at the local book store Eddie's News and if not, they can probably find out if copies are still available for purchase and order one in for you.

More on the city's early years can be found on the City's Archive website and more recently a new twitter feed has appeared on the scene, named after the city's original newspaper the The Optimist provides glimpses into the city's historical roots.