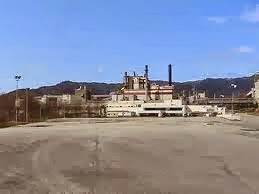 While we await further word on the fate of the ongoing legal efforts related to the Watson Island Development Corporation and the City of Prince Rupert, some of the past ghosts of the industrial site have appeared on a provincial website.

Two separate categories have been created on the BC Bid site,  one notice related to the City of Prince Rupert's plans for Demolition and Salvage of the former pulp mill at Watson Island and the other seeking interest in the Sale of Equipment from the Watson Island site.

The items go back to the days of Sunwave, the Chinese backed company that one time had thoughts of restarting the pulp mill at Watson Island.

However, as most in the community that are now familiar with that story know, the anticipated rebirth never took place and instead the City and Sunwave ended up in court, engaged in a lengthy court battle over the site.

Over time, that court case came to an end, the events announced this week part of that eventual settlement. The process ahead explained through the Disclaimer portion of the Terms of reference for the Sale of Industrial Equipment:

" The purpose of this invitation for Offers (the “Invitation”) is to solicit offers for certain Industrial Equipment offered for sale by Sun Wave Forest Products and the City of Prince Rupert, in accordance with their “Release and Settlement Agreement.”


In addition to the Sale of Industrial Equipment on the site, the start of the long anticipated process of Demolition and Salvage is now underway.

The first stage comes by way of this notice: "the Request for Proposals for the demolition, Salvage and Removal of structures, contents and equipment at the former Watson Island pulp mill site located in Prince Rupert."

The Demolition and Salvage plans have been part of the background to the Watson Island situation for a bit of time now,  they were last reviewed for the community back in September of 2014.

Six months later, we finally have some movement forward on that plan, with the details on the two ongoing efforts for Watson Island noted above to be found here.

At that starting point, Select Browse for Bid Opportunities, then Opportunities by Organization, followed by City of Prince Rupert

From there, you get to the screen shown below, Click on the document numbers to download a much larger overview of the item of interest.


Listed among the many notes on terms, conditions and expectations related to the two initiatives, is a fairly comprehensive listing of any Hazardous Materials that may be found as part of the Demolition or Salvage project, as well as recommendations for handling of such items.

For those that may be inclined to offer up a bid on some of the equipment for sale, the travels through the prospectus of available items might make for a bit of a time warp adventure.

For instance, to show the progress in computer technology in the ten or so years since the pulp mill last operated.  The photo below highlights one of the computer rooms and the stock of computers in place at the time the mill closure, offering a fascinating trip down memory road.


A fair amount of some of the other items for sale date back even further into the last century, making for what should be an interesting final tally, once the Bid requests deadline of Mid-March comes to an end.

The deadlines for expression of interest in the two initiatives comes up on March 17th at 3 PM.

And while residents will welcome some movement to bring to an end the SunWave chapter of the Watson Island story. Still outstanding and something of which City residents haven't heard much about in recent months, is the status of the current legal proceedings underway between the City and the Watson Island Development Corporation.

It was a topic that made for occasional comment during the November Municipal Election campaign, but one that hasn't generated any form of official update to residents since the fall of 2014.

Leaving some to perhaps still wonder if the cost of any ongoing maintenance and any other assorted costs and issues, continue to make for financial concerns for the City heading into its 2015 budget deliberation period.

Still, the tangible moves of this week to begin the demolition process and sell off some of the equipment from the site, will surely be greeted as a positive development. Particularly in how it brings a bit of closure on one period of a story that has captured the imagination, if not held the community hostage for the last ten years.

You can review all of our background items related to the Watson Island saga from our archive page here.
Posted by . at 8:43 AM