The environmental review process for the Pacific Northwest LNG project has come to a stop for a second time, as the Canadian Environmental Assessment Agency seeks clarification on a number issues related to effects on the habitat of the Lelu Island area.

The CEAA makes note on its website of its February 25th to request to Pacific NorthWest LNG for additional information from the proponent related to the Environmental Impact Statement.

The environmental assessment started in April of 2013, halting once before in 2014 as issues related to the development of the jetty from the Pacific Northwest LNG plant to the dock, that review which took place in May of last year resulted in changes to the design of the project, notably the addition
of the suspension bridge provision for the proposal. 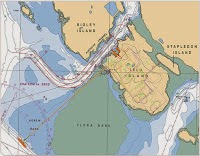 According to an article in the Vancouver Sun, the halt has been on for close to three weeks now, a  pause which could affect the timeline leading to the end of the review which is expected towards the end of June.

It was at that time that Petronas, the parent company of Pacific NorthWest LNG was planning to announce its Final Investment decision.

Pacific NorthWest LNG spokesman Spencer Sproule, provided some comments for the Sun article, though he did not indicate if the second halt in the review would have an impact on the company's final investment decision announcement plans.

You can review the full article from the Sun here.

For more background on the Pacific NorthWest LNG project see our archive page here.
Posted by . at 9:07 AM