Canoes will take to the water once again in a celebration of shared heritage as First Nations residents of Metlakatla, Alaska move forward with their plans to retrace a trek of two years ago, one which saw a canoe journey take place from Metlakatla, BC to the Alaska community.

As we reviewed on the blog back in August of 2013, the Gathering Strength Canoe Journey was a highly anticipated event that was well received in both communities, you can review some of that journey from the Facebook page that was created for it.

This years project which is being organized around Founder's Day in Metlakatla, Alaska will see the canoes transported to Ketchikan by ferry before the travelling party takes to the water at Saxman,.

From there the group will travel to Annette Island in time for the festivities surrounding the celebration that heralds the founding of the community on August 7th, 1887.

Those participating in that first stage of what will become the larger trip to British Columbia, will be joined on that day by Dayna McKay, the acclaimed Tsimshian long distance swimmer, who will have been making her way to Alaska by that time. 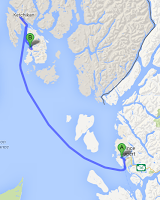 She plans to take to the water just over the US/Canada border and swim from Canada to Annette Island, a swim that she anticipates will take between three and possibly six days depending on tides.

Following the Alaska event of the 7th, the canoes will then launch phase two of the adventure, returning to the water, this time destined for Metlakatla, BC.

A journey that organizers believe will take two weeks to complete, which would bring them to the North Coast sometime in the third week of August.

The Tsimshian paddlers will also be joined by those from Tlingit communities and from the Haida in Southeast Alaska.  As well, there are plans for paddlers from seven villages in British Columbia to take part in the summer time journey.

You can learn more about the plan for August from this item from KRBD Radio in Ketchikan
Posted by . at 8:53 AM

Email ThisBlogThis!Share to TwitterShare to FacebookShare to Pinterest
Labels: Canoe Journey from Alaska to BC planned for August, March 2015