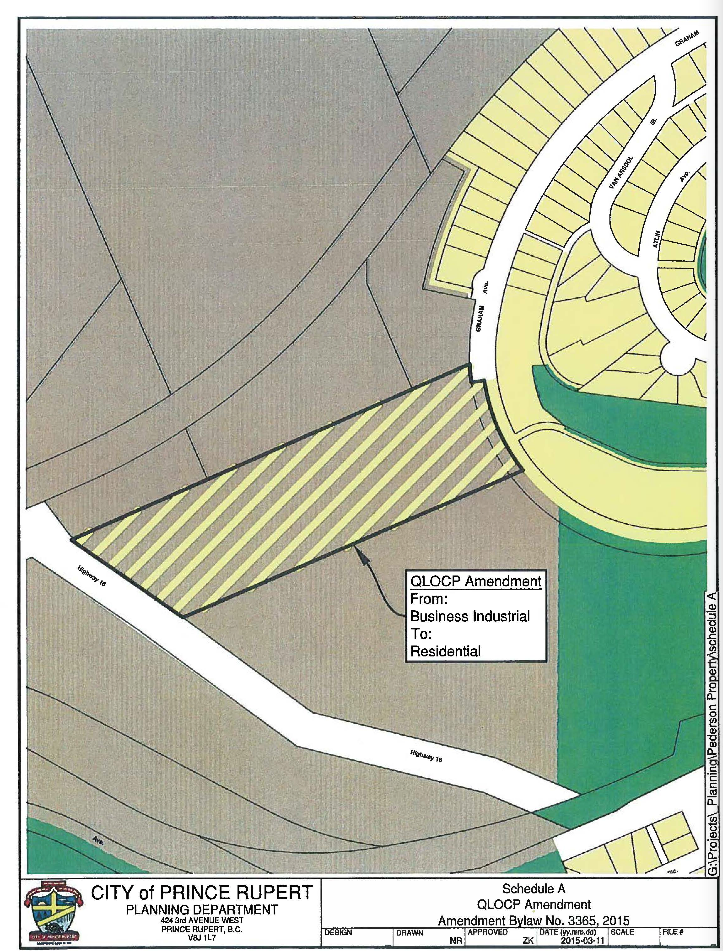 As we outlined in a post prior to our break from blogging last week, City Council is currently examining a proposal from a Prince George developer to carve a new housing development out of a wooded area off of Park Avenue, near the BC Ferries Terminal on the west side of the City.

The proposal which appeared as part of last Monday's Agenda package, highlighted the nature of the proposed development and the prospect of a secondary road access that it would provide for the Graham Avenue area of the city.

Last Monday, Council members received a presentation from the Zeno Krekic, the City Planner who outlined the basic plan moving forward for the project, which as a first step will require some rezoning of the land in question.

As part of the process, Mr. Krekic observed that before any work gets underway on the site however, the proponent is to provide for  a public information session to further explain the project for the city's residents.

Following the City Planners overview, council members were offered the opportunity to outline concerns or ask questions regarding the proposed development, with Councillors Cunningham, Niesh and  Thorkelson offering a number of observations on the topic.

In particular, Councillor Thorkelson  expressed an interest in addressing the need for multi family housing options and wondered if that could be tied into this current proposal.

However, Mr. Krekic pointed out that in this first phase of the proposed development for 30 new homes, the housing stock would be of more upscale single family housing which offers the most financial sense for the proposal. He further noted that the proponent did have plans for potential future development of multi family housing in areas adjacent to the area currently under consideration.

The City planner also suggested that the topic of furthering those multi family goals for the city, might be best addressed as part of the public information session to be held by the proponent.

Following the presentation, Council gave first reading to the proposed zoning and Community Plan changes, setting in motion the process for further consultation on the project.

You can review Mr. Krekic's presentation from the City's Video Archive at the one hour two minute mark.


For more items related to City Council Discussions see our archive page here,  we also have a page dedicated towards housing issues on the North Coast, you can review our items from those listings here.
Posted by . at 8:58 AM