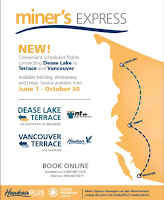 The growing importance of the mining industry in the region is getting a bit of recognition from the Northwest's local airline Hawkair, with the introduction of a new service that links Vancouver to Dease Lake by way of Terrace.

The service is a partnership between Hawkair and Northern Thunderbird Air will open up the northwest to mining executives and workers, with the two airlines looking to continue to provide the kind of service that will make them the go to airline for the expanding mining sector of the region.

The new service debuted this week with a June 1st flight, with service now available on Monday, Wednesday and Friday until October 30th.

“We’ve received tremendous requests from the Mining community as well as the Stikine region to see the return of our seasonal connector service to Vancouver,” ...“We are thrilled to be working with our sister airline Hawkair to bring back the flights for 2015.” -- Northern Thunderbird Air General Manager Mike Harris introducing the return of the popular Miner's express service to the Northwest.

The service agreement was first announced back in April when the two airlines finalized their plans to bring back the popular service which makes use of an 18 seat Beech 1900 aircraft for the Dease Lake portion of the trip.

For more items related to Northwest Air Travel see our archive page here.
Posted by . at 8:12 AM