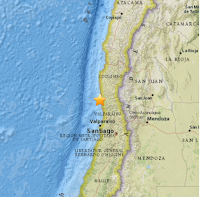 See Update at bottom of page

The risk for the North Coast and Haida Gwaii is not considered high, but in the hours that will follow, officials in British Columbia and Alaska will be monitoring developments from the 8.3 magnitude earthquake on the central coast of Chile this afternoon.

Tsunami advisories, watches and warnings have been issued for locations up and down the Pacific Coast, to Hawaii and beyond towards Asia.

The first massive jolt struck just north of the capital city of Santiago just before 4 PM on Wednesday afternoon and since that time a string of aftershocks have continued to affect the region.

Along with the earthquakes, tsunami waves have been reported along the Chilean coast, with warnings continuing through the evening.

As for the North Coast, Haida Gwaii and north through the Alaska panhandle, No Watch, Warning or Advisory has been issued to this point, though a public advisory was posted shortly after the 4 PM event in South America.

You can access any updates to that advisory through the West Coast and Alaska Warning Centre website here.

Emergency Information British Columbia issued an update for the province at 6:22 PM outlining the current analysis for the region. 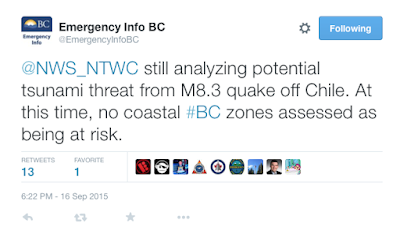 An map posted to the US National Weather Service's Tsunami Alert feed provides a visual overview of the Tsunami Travel Times anticipated from Wednesday's event. 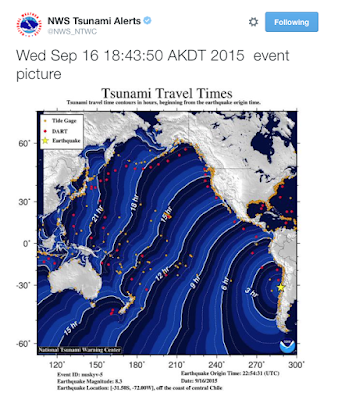 Should there be any more information to relay, we'll add it to this post on the blog and provide updates on our Twitter feed. 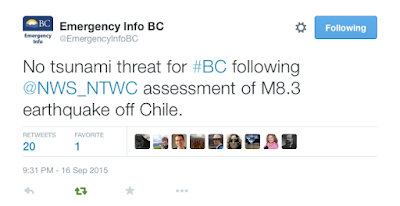 Some notes from the news services on Wednesday's seismic event in Chile: