Two North Coast brew houses are in Victoria this weekend, showcasing the tastes of the Northwest at one of the province's top Beer Festivals.

Prince Rupert's Wheelhouse Brewery and Sherwood Mountain of Terrace are both set up at Royal Athletic Park in the provincial capital, offering up their top line Ales for the curious and the thirsty at this years edition of the Great Canadian Beer Festival.

The annual celebration of hops, yeast and secret ingredients is one of Victoria's popular end of summer events a two day festival that wraps up today.

The Wheelhouse crew is found in Booth 6 at the event, featuring its Scurvy Dog Spruce Ale, described as featuring spruce tips which add a sweet, citrus taste that pairs well with Centennial and Amarillo hops.

Also tempting the taste buds of festival goers is Smokehouse Kolsch, a light bodied laggard ale that uses 100 percent German malt, hops and yeast, with a bit of traditional German beechwood smoked malt to add to the concoction.

As well, the Wheelhouse travellers have brought down their First Mate White IPA, which is joint venture between Yellow Dog Brewing of Port Moody and the Prince Rupert shop, it's a carefully balanced and delicate light bodied ale, with a combination of Galaxy, Mosaic and Citra hops.

Among the tasting options for the thirsty their Friar House Lager, described as a light refreshing lager that is perfect for those new to craft beer, or for session "crafters" seeking a fresh local tastes.

They also will feature their Coast Mountain Pilsner, which has a focused bitterness and crisp finish with the taste of lingering hops.

The third entry for the Terrace brew masters is the Skeena West Pale Ale, the flagship ale for Sherwood Mountain, a brilliant gold ale featuring a hint of caramel, toast and four special hops.

More on what Sherwood Mountain is all about is available here. 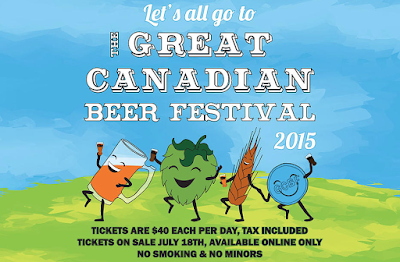 The full listing of ales and beers from participating breweries at this years Great Canadian Beer Festival can be found here.

The Northwest brewers are looking to carve out some space among a list of well known British Columbia brewing operations, as well as some new entries from outside the province.

Saanich News -- Spitting beer: a tale of beer geekery
Victoria Times Colonist -- Belly up to craft-beer festival
Posted by . at 10:14 AM