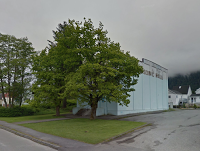 Monday night's Public Hearing on the topic of a rezoning proposal for the Masonic Hall certainly made for a fairly engaged audience, with close to ninety minutes of observations, concerns and questions provided for Council members to consider.

The Public Hearing featured a number of Prince Rupert residents taking to the Council chamber microphone to offer up their comments on the proposed rezoning of the Hall, which would be used for storage of furniture for MacKenzie Furniture in the city.

The hearing opened with a presentation from the City Planner Zeno Krekic, who reviewed his comments of recent weeks related to the proposed rezoning, noting the lack of light industrial options at the moment in the community and how the proponents of the warehouse operation had addressed a number of the previous concerns of Council related to the proposal.

That was followed by a pair of presentations from MacKenzie Furniture with both Rob and  Brian Eby providing Council with some background not only on the proposed warehouse use, but on the ongoing expansion plans for their downtown furniture store and their commitment to the community.

As for the remainder of the public comment period, for the most part, the majority of those that spoke in support for the rezoning included a number of members of the local Masonic Lodge. Those participants in the hearing highlighted the financial situation that their Lodge finds itself in at this time and how the rental income from the warehouse would go towards upgrades and maintenance of the long standing fixture on Sixth Avenue East.

Those that had concerns about the proposed used for the most part lived near the Masonic Hall and noted it's proximity to Lax Keen School and the Moose Tot Park directly across from the Hall as key issues for Council to consider.

For the most part, those that were opposed to the zoning outlined their concerns related to safety for the residential area, with the location of the Tot Park in relation to the Hall the counterpoint of their discussion points.

Among those that offered up counsel against the proposed use was Bob Thompson, a now retired member of the City of Prince Rupert's operations staff, who was employed by the city for thirty three years, he provided a number of observations about the concept of a warehouse being placed in the same area as a children's park.

Noting that the City will be sending a representative ( Mayor Lee Brain ) to the upcoming Cities Fit for Children conference this November, Mr. Thompson offered up some thoughts for Council to consider on that theme.

"I don't think you're going to see at that seminar, where they start talking about putting industrial zones right beside your busiest Tot lot and beside your playgrounds, I just don't see that happening" -- Prince Rupert resident Bob Thompson speaking to the issue of rezoning of the Masonic Lodge on Monday night

All told, thirteen people made presentations related to the proposal, nine in support, five against.

From that Council took the discussion into the Regular Council session, where an energetic discussion on the topic took place, with Councillors Niesh and Thorkelson lining up on the side of those that were concerned about the proposed use, with the remainder of council members finding the steps taken by both Mackenzie's and the Masonic Lodge as enough to warrant approval of the rezoning.

During the discussion all members of Council weighed in with comments on the theme.

Starting with Councillor Niesh who had strong concerns focused on safety and location issues related to the proposed warehouse at the Masonic Hall near the Park.

"Because the city was so broke we have had to shut down every park in town, now we have one of the few standing parks left, that people have to travel to get to, and now they're going to have to be more concerned about traffic. It's already bad enough that it's beside the highway, now they'll have to watch in another direction. There's just so many things I find wrong with this proposal ... would you want it next door to your house, and these are next door to someones house and its a park, that's what I have to say about that.  -- Councillor Wade Niesh speaking on his concerns about the nature of a rezoning of the Masonic Hall for warehouse usage.

Councillors Cunningham and Kinney took the lead in support of the motion, providing a number of points of support towards the proposal.

"I'm not going to name names, but I've talked to these people personally about it, I took the time to go out and walk around and talk to people because I was quite concerned about this and this is what I find so surprising. The people all around that building, don't seem to have any concerns with it, you know,  from a safety point of view I think they've addressed it as much as they can" -- Councillor Cunningham in support of rezoning for the Masonic Hall

"I'm in favour of it because I've been hairdressing here for fifty five years and I've seen so many businesses leave this town and I certainly wouldn't want to see MacKenzie's with what all they give to us and they've  done for us leave our town. And I can't see no big deal about it, it's not about drivers and stuff ... I think we have to wake up and start smelling the roses and let people in for business and let's do some business"    -- Councillor Kinney added his voice to those in favour of rezoning the Masonic Hall on Monday evening.

Following the near thirty five minute discussion of the zoning amendment during the Regular Council session, Council approved the rezoning application with only Councillors Niesh and Thorkelson voting against the motion.

You can review the full discussion from the City's Video Archive, the Public Hearing takes place from the start of the night to the one hour twenty five minute point, while Council's discussion on the theme can be reviewed from the one hour fifty eight mark through to two hours and thirty two minutes.

Our full overview of the discussion of both the Public Hearing and Council zoning review can be found on Council Timeline for September 14th.