The numbers for the CFIB number crunchers no doubt are still on the high side, when it comes to what they would like to see as far as a tax gap burden across British Columbia goes.

But overall for the Northwest region, Prince Rupert's tax differential, is a lesser grab than most communities when it comes to the tax gap between residential and commercial rate payers.

However, before they pop the champagne corks over at Prince Rupert City Hall, it should still be noted that while not hosting the largest gap in the region, Prince Rupert can still be found much closer to the bottom of the list than to the top, ranked at 133rd place of the 160 communities reviewed for 2014 from the CFIB study.

The report known as the BC Property Tax Gap Report was released just prior to last week's UBCM gathering in Vancouver and takes a ten-year look at the disparities between residential and commercial property tax rates across the province, also known as the “tax gap”, something they explain quite well with the information piece below:

The gap review this year using taxation information from 2014, provides the latest measure of property tax fairness for small business, with the CFIB report highlighting which communities are more business friendly across the province.

The One year change in the tax gap for Prince Rupert has seen an increase of 6.3 percent, while the five year change from 2009-14 which featured a decrease of 4.7.

Over the course of the 10 year rankings, Prince Rupert was allocated a placement of 110 of the 160 communities surveyed over the last decade.

Port Edward was ranked at 86th for the year, while Stewart received the best score from the CFIB at 5th overall for 2014 when it comes to a low gap between business and residential.

The full chart for Northern British Columbia can be found below, highlighting Stewart's success at keeping that gap as low as possible, while Terrace gets a scolding for continuing to have the highest gap in place of all Northwest communities. 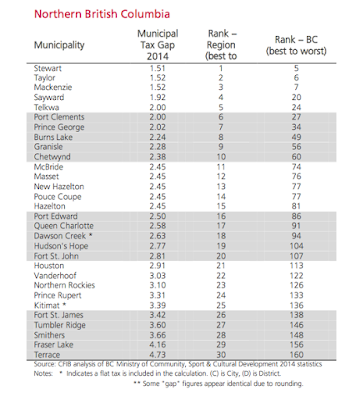 The One year change in the tax gap for Terrace has seen an increase of 1.9 percent, while the five year change is noted at 22.7 percent

Over the course of the 10 year rankings, Terrace was allocated a placement of 141 of the 160 communities surveyed over the last decade.

The CFIB has offered up six suggestions for municipal governments to consider as they seek to have communities across British Columbia put a Cap on the Tax Gap,

1. Cap the property tax gap between businesses and residents at a maximum of 2 to 1.

5. Close the gap without raising the business tax rate.

6. Move away from utilizing a flat tax rate for residential properties, as it can create large distortions in the tax gap when there are spikes in real estate prices.

You can take note of more background on those six key recommendations here.

For a more expansive look at the issues related to the Tax Gap see the full report from the CFIB available here.

For items related to Prince Rupert City Hall discussions on taxation and other issues see our archive page here.
Posted by . at 9:27 AM