Hot on the heels of a rather enthusiastic endorsement of the leadership of Mayor Lee Brain from Premier Christy Clark last week at UBCM, comes a follow up review as to how the Mayor sees his job in the community and beyond.

Towards that theme, an interesting entry has appeared on Mayor Lee Brain's Facebook page over the last 24 hours, with the Mayor providing a clarification for the community it appears, as to how he sees his duties as Mayor of Prince Rupert.

The key passage of the six paragraph manifesto seems to address the theme of relationship building both in the community and beyond the city limits.

"As Mayor, you will see me with many different people, including people you may not like from institutions you may not agree with. This is the reality of my position, as your diplomat. Just because I’m building relationships with everyone, does not mean that I am succumbing to their interests at the expense of our community."

Those notes seem to be in response to a barb directed at the Mayor from a previous entry on his Facebook page, after  the Mayor had re-posted an item from the weekly newspaper which featured the visual of he and Premier Christy Clark, the two in the usual grip and grin photo opportunity from the recently concluded UBCM gathering.

The photo of the Mayor and Premier Clark appears to have caught the eye of Ken Lippett, who took to the Mayor's comment section of his Facebook page to offer up some political advice on appearing too chummy with the leader of the British Columbia Liberal party.

The item from Tuesday would appear to be the Mayor's rebuttal to Mr. Lippett and others in the community that may have similar advice for his political future. And with the prism of the Facebook culture (with its likes and thumbs up emoticons), the statement has found for a fair amount of support from those that enthusiastically follow the Mayor's work. 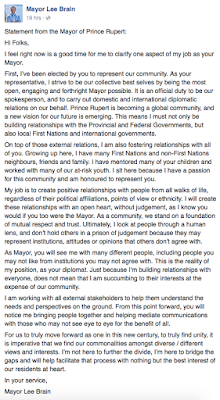 The response to what appears to be a snarky, but slight political snipe though would seem to be a little bit of an over reaction. One that the Mayor had originally handled rather properly with a short concise comment on the original note, but somehow a few days later suddenly required a major statement.

From a Facebook comment, the Mayor seems to have take the incident as an opportunity to expand in rather grand detail on his vision of municipal governance and how to build relationships. Noting that a Mayor is the city's spokesperson on many issues when it comes to municipal affairs:

"First, I’ve been elected by you to represent our community. As your representative, I strive to be our collective best selves by being the most open, engaging and forthright Mayor possible. It is an official duty to be our spokesperson, and to carry out domestic and international diplomatic relations on our behalf."

As well, later on in his information statement, the Mayor observed as how he plans to move forward on that vision:

"I am working with all external stakeholders to help them understand the needs and perspectives on the ground. From this point forward, you will notice me bringing people together and helping mediate communications with those who may not see eye to eye for the benefit of all."

All of which makes for quite the manifesto for the future, considering it all appears to have been spurred on from one politically motivated comment on a Facebook page.

You can review more of those thoughts from the Mayor's preferred communication portal here.

Email ThisBlogThis!Share to TwitterShare to FacebookShare to Pinterest
Labels: Mayor Brain on vision and future engagement