Curling season on the North Coast is getting ready to ROCK

The Roaring Game will be taking to the pebbled ice of the Prince Rupert Curling Club in just a few weeks, with local curling enthusiasts making ready to tackle the schedule ahead.

The Curling Club is featuring six major events for the 2015-16 Curling Season, running from October until March, as well, the regular league play will make the Seal Cove facility a busy place through the fall, winter and early spring.

The season kicks off with the popular Octobeerfest on October 3rd at 6 PM, an opening to the season that combines shaking off some of the off season rust with the beverages of the local Wheelhouse Brewery, add in some live music and free admission makes for the way to launch the new curling year. 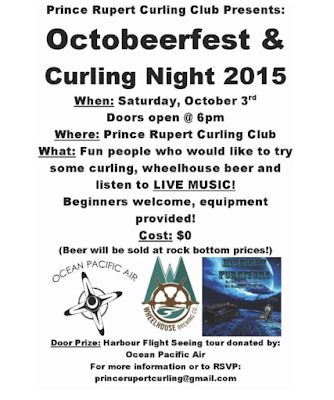 That addition to the local curling schedule was put on the list last season and proved to be a popular introduction to the sport for some who had not given curling a try.

The partnership with the local brewery has provided the Prince Rupert Curling Club with a bit of provincial notice, as we outlined back in February.

Following the ice breaker for the year, the list of bonspiels is as follows

You can find out more about the Curling club's events and inquire about league play by contact club officials through their email account at princerupercurling@gmail.com

You can follow the Curling season through our archive page here.
Posted by . at 10:03 AM

Email ThisBlogThis!Share to TwitterShare to FacebookShare to Pinterest
Labels: Curling season to start up October 3