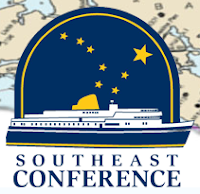 The City of Prince Rupert is handling the hosting duties for the annual get together of Southeast Alaska communities, with three days of discussion and resolutions to be reviewed in sessions being held at the North Coast Convention Centre.

Municipal politicians, Alaskan First Nation communities and business and government officials from communities along the Alaskan panhandle are all in Prince Rupert this week, part of their annual Southeast Conference Business Meeting.

The three days of discussions started this morning with opening remarks, with the Patricia Phillips the President of the Southeast Conference and Lori Blood, providing for the opening day overview.

Included in the morning's opening events will be a welcome from Prince Rupert Mayor Lee Brain, who will offer delegates a sample of what Prince Rupert has to offer for the next three days.

From those opening comments delegates will then get a glimpse of the work ahead, which will feature a number to topics of share interest between Alaska and British Columbia.

The theme of Cross boundary and Transboundary issues will get the first review right out of the gate, with Byron Mallott, the Lieutenant Governor of Alaska and David Morel, Assistant Deputy Minster of Energy and Mines for British Columbia hosting a one hour session at 9 AM.

Some Prince Rupert flavour will work its way into the first day of the convention as well, at 10:30 Prince Rupert Tourism President Scott Farwell will address delegates, while the North Coast's LNG ambitions will make up part of the afternoon notes.

A 1:30 session will feature three prominent representatives of the LNG industry in BC, with Herb Pond from the BG Group, Tessa Gill of Pacific NorthWest LNG and David Keane of the BCLNG Alliance bringing the Alaskan neighbours up to date on how where the region is at when it comes to LNG terminal development.

One of the major topics of any Southeast Conference gathering is a look at the impact of the Alaska Marine Highway on their communities and on that topic there will probably be some interest from Prince Rupert.

The first day's business work wraps up at 3:30 with Mike Neussl, the Deputy Commissioner for the State of Alaska Marine Highway System will be hosting a conversation on issues related to the main transportation connector for the Southeast conference.

Prince Rupert officials have a shared concern with the other conference members when it comes to the AMHS, with recent schedule cutbacks to that service to Prince Rupert and the status of renovation of the AMHS terminal at Fairview among their items of interest.

Day one wraps with a 5 PM train trip to the North Pacific Cannery Historical Site where the Prince Rupert Opening Day reception is to take place, with participants returning to the city at 8:30 PM


Day Two of the conference will focus on Economic issues for the Conference delegates, with a number of panel discussions on future planning and economic opportunities, a sample of some of the discussion points for those session can be found from the Southeast Economic Preparing for 2020 Plan, you can review that document here.

Polling stations will also be open for delegates through the day as the regular business of the conference continues on a number of resolutions.

While those agenda items are moving forward, delegates can also take advantage of a pair of tours that have been planned for the afternoon, with delegates offered the opportunity to take Harbour Tour of the Prince Rupert and Port Edward area or a walking tour of Prince Rupert.

The Annual Banquet and Scholarship Auction brings the second day to an end.

The third day is getaway day for the delegates, with the annual Business meeting and a Board of Directors Meeting the final events of the 2015 Conference.

The majority of the Convention events are schedule to take place at the North Coast Convention Centre on 1st Avenue West.

A full review of the Agenda for the three day conference can be found here.

You can learn more about the history of the Southeast Conference and some of the focus of its work here.
Posted by . at 8:46 AM