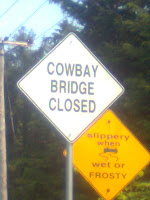 Update: Repairs were completed and the bridge paved and reopened by Friday evening September 11.

In Case you missed it, and judging by the volume of cars and trucks doubling back up Drydock Hill road this morning you're not alone, the City of Prince Rupert closed the Cow Bay Bridge to Traffic on Wednesday.

Yesterday the City began the process of setting up and preparing to conduct required Maintenance and Upgrades to one of the city's main East - West access points.

The announcement of the road closure was tasked to the city's work crews, who have placed signs on the approaches to the Bridge on streets leading to the George Hills Way area.

While official notification came by way of a short notice which appeared in the far back pages of the weekly paper.

However to this point, no information related to the closing has been posted to the City's Website, the location one might expect to find such kind of alerts pertaining to city announcements.

Though, as we've noted in the past, that lack of use of the City's website is not all that surprising of late.

In recent months, the City has not made much use of their online presence through their website for these kinds of civic notifications. Leaving things to the most part to be posted to Mayor Lee Brain's Facebook page leaving that social media portal to carry the flow of information on civic items, in between photos of some of the Mayor's most recent community events.

However when it comes to a notification about a major road closure, even that online location had not mentioned the Cow Bay remediation work as of this morning.

The timeline for the project as well seems rather up in the air, with Wednesday evening's notice advising that the Bridge is to be closed until the completion of the project, with no explanation, or at least a guideline as to when it's hoped that traffic can use the road again.

Something which if we were heading into the days of the local Udderfest could provide some material for the local theatre community, perhaps an opportunity to feature a satirical skit revolving around completion date pools on any number of projects around the city.


While the cars may be banished from the Cow Bay Bridge, foot traffic can still make it across the gap between the Yacht Club and Atlin Terminal, with the City advising pedestrians to use the still available Millennium Walkway that runs along the Cowpuccino side of street.