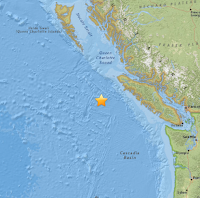 The North Pacific fault lines just west of Vancouver Island rumbled a bit during the mid-afternoon period on Saturday, with a 4.4 magnitude earthquake recorded 212 kilometres Southwest of Port Hardy.

The seismic event  at a depth of 10 kilometres was noted at just before 3 PM.

It is the most recent mid level event in that region this year, the last recorded event in the North Pacific region was on August 17th, when a similar sized temblor was recorded in much the same area.

Earlier this week a major earthquake struck the coast of Chile, recorded at 8.3 magnitude that event resulted in notices of potential Tsunami activity for the North American west coast, Hawaii and South Pacific regions.

You can review some of the recent seismic activity off the North Pacific region from our archive page here.
Posted by . at 10:45 AM