Prince Rupert City Council will once again make use of the Alternate Approval Process to gauge the public interest when it comes to a proposed sale of a stretch of land in the Graham Avenue area.

The first indication that the City planned to go the route of the AAP came last month through a notice on the City's website and an advertisement in the weekly newspaper.

The land in question seen in the diagram below, is an 850 square metre stretch which the city plans to sell to the Bryton Group which owns adjacent property in the area.

The value of the land is recorded at 21,000 dollars and according to the city advisory, the money received for it would be directed towards a reserve fund for future acquisition of park lands. 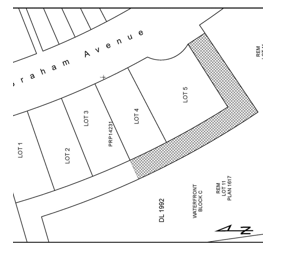 As part of the City's flow of information on the topic, Councillor Blair Mirau was front and centre to explain the process to the public through a video presentation recently posted to the City's YouTube page as well.

The Alternative Approval Process is a mechanism that puts the onus on the public to make their views known to the City by submitting elector response forms, available at City Hall, the Civic Centre and the Prince Rupert Library.

As part of that engagement ten percent of the city's population or 866 of the eligible residents must sign and deliver their forms to City Hall to express their opposition to the City's plan.

The deadline for submission of those forms is 4:30 on June 3rd.

Should those in opposition to the city's moves find the required 10 percent support, it would mean that the city has to move on to a full referendum if it wishes to proceed with the proposed bylaw plan.

A print out form has been made available through the City Website for those interested in providing response to make use of, find it here.

The decision to use the AAP  in this instance does not seem to have been part of the conversation at any of the recent Public City Council sessions, so to this point there has been no indication if Council members are a united block when it comes to the proposed sale of land and the use of the AAP to achieve it.

In the past, Councillor Joy Thorkelson has expressed some concerns when it comes to the controversial process, providing conditional support for previous city initiatives on the theme, but with cautious observations related to it.

Whether she continues to have hesitations about the way that mechanism is used, or if any of the new members of council have thoughts related to the process would to this point appear to be limited to discussions around the City Hall offices, or perhaps expressed during the growing list of closed sessions that City Council holds.

The Alternate Approval Process has increasingly been used as a way of moving initiatives forward for the different levels of local government in the area.

It was previously put in place to absorb the area of Lot 444 into the city boundaries and to secure a loan agreement for upgrades to the Prince Rupert airport, most recently it was put to use by Skeena-Queen Charlotte Regional District, as that organization looks to move forward plans to change its name.

You can review some of the previous AAP initiatives below:


The stretch of land in question would appear to be another flash point for Graham Avenue residents when it comes to the proposed development of land in the area between Graham and Park Avenue.

The CBC's George Baker recently took note of the controversy for the morning program Daybreak North as residents of the area outlined their concerns at the loss of what they called parkland.

The description of the area as a park might take a bit of an imagination, it's more of a sliver of scrub land overlooking the BC Ferries parking lot more than anything else, however the City's approach of the AAP to try and move the process forward is clearly something that is rankling a number of residents in that area, (as a letter to the editor of the weekly paper indicates).

The city's plan to make use of the AAP concept now becomes another item on what seems to be a growing list of concern for residents as to how the city has handled the development question on their side of town.

A development plan which has expanded beyond the original concept of a Seniors condo project of 2014.

It may be a struggle to reach the 866 names required to stop the City's AAP process and take the issue to a full referendum, but the early indications would seem to suggest that the west side residents will be working towards that goal.

The push towards that ten percent opposition making for another twist in the lengthy back and forth between what the city has planned for the area and what the residents want to see.

Some background on the past exchanges over the Graham Avenue Land issue can be found below.

For more items related to Housing and Development in the region see our Housing archive here.

More background on City Council issues can be found on our Council Discussion page.
Posted by . at 9:18 AM

Email ThisBlogThis!Share to TwitterShare to FacebookShare to Pinterest
Labels: Graham Avenue residents will need to use AAP to stop land sale in area