Last weeks Prince Rupert City Council session provided a glimpse into the future for what the Atlin Terminal area of the City's waterfront may soon look like as representatives from the Prince Rupert Port Authority outlined their Central Waterfront plan.

With the Port in the final stages of closing a land deal with the City of Prince Rupert that will provide close to 1 million dollars for two parcels of land in the area, the larger vision of what will take shape outlined the combination of a new office building and covered public space overlooking the harbour dominated the overview.

Mr. Andrew Mayer and Mr. Shaun Stevenson provided the visual tour of the proposal. It outlines a process four years in the making, making use of the resources of architects and designers  from OMB (Office of McFarlane Biggar) who after a consultative process involving both the City of Prince Rupert and a number of area stakeholders created a plan that will call on the history of the area as part of the focus for their redevelopment.

The first phase of the development will feature a new office building, possibly three stories in height on the site of the old Odin dock, with a public space in the form of a large scale covered town square providing a new public access point for the community and its waterfront. That space will also be used as a staging area for Cruise ship arrivals and cultural programming, with a focus on First Nations in the region.

Some of the visual presentations of the overall development plan can be reviewed below
(from the Prince Rupert Port Authority presentation of April 25, 2016): 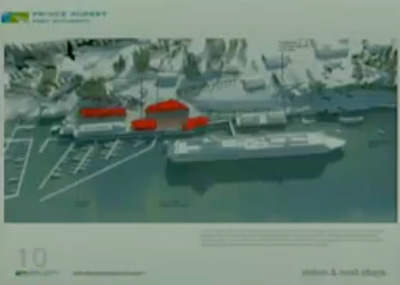 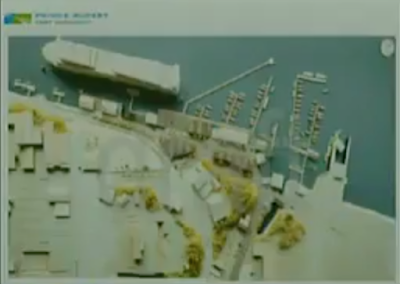 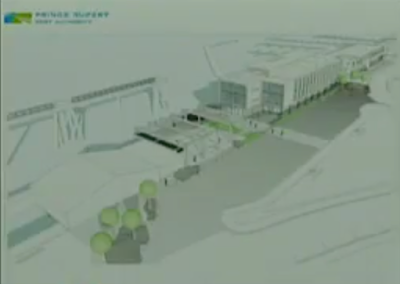 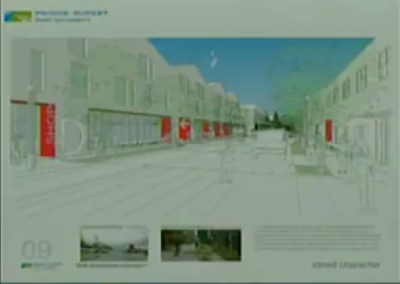 The work in the area will also provide for what is called traffic calming measures and more amenities such as trees, benches and other items as part of the overall plan, parking will also be reconfigured to make the overall area more pedestrian friendly.

As part of the arrangement between the City and the Port, the Port Authority will be required to comply with the Cow Bay development guidelines and includes time lines that must be met or the city has the option to purchase the property back at the current price.

While the Odin Dock and public space development will mark the first steps, the current Atlin Parking lot will at some point be redeveloped as well, with mixed use buildings offering the prospect of shops, dining and other amenities as a possibility as those plans move forward.

The land deal related to the two properties to change hands, the Atlin Parking lot and the triangle of land between the Atlin Terminal and the Cruise Ship Terminal is set to close on May 12th.

Council members had a number of questions and observations related to the redevelopment plans and as the presentation was part of the City's Committee of the Whole session, members of the public also weighed in with some thoughts related to the Port's plans and the city's decision to sell the land to the Port Authority.

You can review some of that commentary from our City Council Timeline feature here.

The full presentation can also be reviewed from the City's Video Archive, with the Port's vision for the Cow Bay area outlined through the first fifty minutes of the April 25th Council Session.

For more items related to the waterfront issues with the City see our archive page here, while overall notes on City Council can be found on our Council Discussion page.

Further background on developments with the Prince Rupert Port Authority can be found from our Archive page here.

Email ThisBlogThis!Share to TwitterShare to FacebookShare to Pinterest
Labels: Port set to purchase Atlin lands with major redevelopment in mind