January has been a pretty hectic period for Calgary based AltaGas, in the space of these first 27 days of the month, the Canadian energy company has now moved forward with a near 500 million dollar terminal project in Prince Rupert, with the proposed development now a featured item on the Alta Gas website.

And while the decision to give the go ahead to the Ridley Project was significant news for the North Coast, it has already been eclipsed in recent days as AltaGas put the finishing touches on a large scale acquisition of the Washington D.C. based American gas distributor WGL.

That 8.4 billion dollar acquisition was announced on January 25th, the full outline to the energy deal can be reviewed here.

Some of the key elements of the acquisition can be examined from this information sheet released by AltaGas.

Media notes on the acquisition can be reviewed below:

Such was the scale of the 8 billion dollar deal, that some other news from AltaGas fell off the radar somewhat.

One item of note of some interest for the North Coast, was an announcement from earlier this week by the Alberta energy company, one that expanded on the area of an additional investment in infrastructure in the gas fields of Alberta and Northeastern BC. 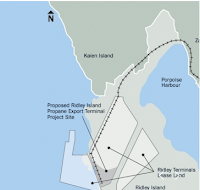 On Monday, AltaGas outlined its plans for a new 180 million dollar investment, noting that it was working with an as yet un-named partner, to construct a natural gas processing facility, with a natural gas separation train to produce Natural gas liquids.

The addition to the AltaGas presence in the gas fields is expected to have access to both the CN rail network, allowing product to be directed towards the Ridley Island Propane Export Terminal.

The overview of that proposed development in Alberta can be reviewed here.

Notes on the Northwest Alberta plans can be examined below:

The news flow of January offers up a glimpse for North Coast residents as to the quick pace of developments when it comes to the business dealings that take place in the energy sector.

As the AltaGas terminal project moves forward, Prince Rupert and Port Edward will soon find a place on the global shipping map, included as a key element of the energy industry and its impact on the Canadian economy.

More notes on the creation of the Liquid Propane export industry in the region can be found on our archive page here.

Email ThisBlogThis!Share to TwitterShare to FacebookShare to Pinterest
Labels: AltaGas announcements this week