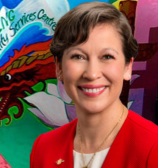 North Coast MLA Jennifer Rice and the Kaien Island Elders are hosting community lunch today featuring a special guest for the two hour event, as they bring MLA Melanie Mark back to the Northwest.

Ms. Mark was the elected to the Legislature in a by-election of last year and with her election to office as the MLA for Vancouver-Mount Pleasant became the first, First Nation woman to take a seat in the British Columbia Legislature.

As we noted on the blog at the time of her election in February, Ms. Mark has Nisga'a, Gitsxan, Cree and Ojibway ancestry and throughout the 2016 by-election campaign she called up on her Nisga'a and Gitxsan roots.

When the final vote was counted from the by-election, she had collected over 60 percent of the vote from the voters of Vancouver-Mount Pleasant.

At today's luncheon she will be speaking to those in attendance on what she has accomplished during her time in office and will most likely highlight some of the issues that she and the NDP are taking into the upcoming election campaign.

The event takes place from Noon to 2 PM at the Nisga'a Hall on Third Avenue West, across from Save on Foods.

You can find more on the event from the Facebook page created for today's luncheon.

More items related to provincial politics can be found on our Legislature Archive page here.
Posted by . at 10:15 AM