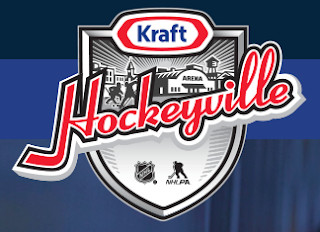 Prince Rupert is now on the Kraft Hockeyville map, with a pair of nominations to the popular cross Canada, sharing the passion of Prince Rupert into the competition.

The first entry into the national event came on Monday from Kelly Clifton, who highlights the electricity that is found in town when the Canucks make a playoff run and how the community has become completely immersed in all things Rampage, calling attention to the city's CIHL team.

For the 100,000 dollar top prize, Clifton is suggesting additional seating for the Civic Centre rink, noting that there's more than enough Rampage fans in town ready to take a seat for game time. 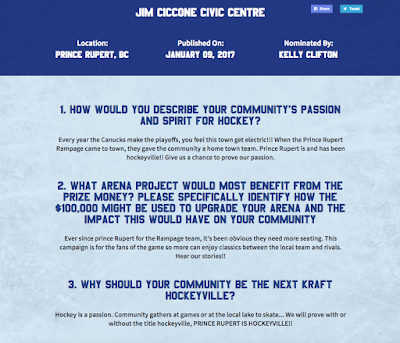 As part of the presentation a video is provided that gives a sample of some of the excitement found in the city at the Canuck parades that take place during playoff runs by the NHL team.

You can review the submission here.

The second submission to the competition comes from Jennifer Nelson  which was also put into nomination on Monday.

In her notes as part of the competition entry she also calls on the love of the Vancouver Canucks by Rupertites as part of the passion for the sport that could put Prince Rupert to the top of the listings, the entry much like the Clifton version makes mention of the 'Canuck parades' that travelled through the city during the 2011 playoff run.

She also provides a bit of background on how the Civic Centre complex would benefit from the 100,000 dollars in top prize money, noting how the recreation facility is the centre of the community.

A look at Ms. Nelson's nomination page can be found here. 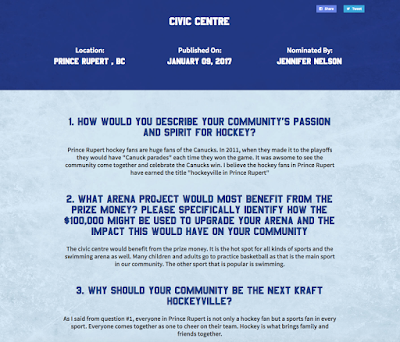 There's always room for more submissions when it comes to making the case for the city for the competition, with many communities featuring a number of passionate stories about what makes their community a Hockeyville candidate and how important the local rink is to the day to day activities.

The best indication when it comes to becoming involved and offering up as many submissions as possible comes from the residents of Princeton. That BC community is putting in a large effort to showcase their community with a number of presentations to secure a nomination.

As you will see when you scroll through the list of BC Communities, more entries do seem to highlight the enthusiasm for the project and the passion for the sport.

As we outlined last week, the first community to get into the Hockeyville mix was Masset, with a nomination that looks to add a refrigeration unit to the local roller rink, something that would add to the resources for the community and help make hockey part of the Haida Gwaii sports scene.

Bella Coola was next on the listings joining up on Friday, Prince Rupert adds to nominations to the growing list, with the prospect of more to come before the nomination period closes.

Besides the prospect of securing funding for attention to local rinks, the Kraft Hockeyville Community could host an NHL Pre Season game.

Nominations close on February 5th, with the Top Ten Announcement to come on March 4th.

The first of the online voting for the successful nominees will be on March 12 and 13, with a second voting period to take place on March 19 and 20.

The Announcement of which community will be Kraft Hockeyville for 2017 will take place on April 1st.

Now that we have a few candidates from the Northwest in the running for cut down day of February 4th, we'll track the progress from an archive page, where you can keep up to date on how each is making their way through phase one and if any advance into the next round.