Chamber's Business Excellence Nominees list down to the finalists 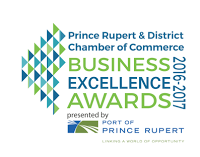 The final count from the first round of the 2016-17 Business Excellence Awards has whittled down a lengthy list of 103 contenders down to the final nominees and now the public will have one final chance to reward those businesses that have impressed them the most over the last 365 days.

Following the nomination announcement event of Tuesday, the Prince Rupert and District Chamber of Commerce opened up the online voting booth to the public, with the final voting process now underway.

The final contestants in the fifteen different categories provide for an interesting cross section of what the city's commercial sector has to offer the region, with some established business operations competing with recent arrivals on the scene.

Business of the Year
Sponsor -- BDC

Voting in the categories available for the public takes place on line through the Chamber of Commerce website.

You will be required to request a four digit access code to cast your ballot, you can vote once per day through to the February 10th voting deadline.

The Awards will be handed out at the Gala Celebration at the Lester Centre on March 4th.

For more items on the commercial scene in the Northwest see our archive page here.
Posted by . at 10:09 AM