The proponent of the propane export terminal to be built at Ridley Island may have a few more balls in the air at the moment other than their North Coast terminal plans, with AltaGas  currently the subject of merger rumours swirling around financial circles in both Canada and the United States.

The Wall Street Journal got the rumour mill up and running with a story on Thursday that outlined the background to what are said to be negotiations between the Alberta based energy company and WGL Holdings of Washington, D.C.,

Though both would be partners are keeping any comments related to any negotiations and potential impacts of the proposed corporate marriage mostly themselves. For it's part AltaGas  has only made public that they are engaged in talks with what they referred to as a third party.

The Alberta based company also noted that no agreement has been reached as of yet and there was no guarantee that the talks would continue. A statement issued by AltaGas on Thursday outlined that the company would have no further comment on the negotiations related to the potential transaction until it is an appropriate time to do so.

The merger rumours proved to be beneficial to the share price for WGL Holdings which saw a significant jump in value as the markets closed on Thursday. 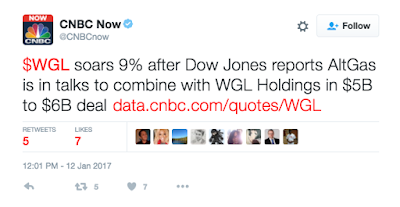 While the WGL share price was rising, as the story began to gain some traction through the day yesterday, trading in AltaGas stock was halted late during the Thursday session at the Toronto Stock Exchange.

A look at the background to proposed AltaGas export terminal for Prince Rupert can be found on our archive page here.

More background on the percolating plans for a potential merger can be reviewed below: