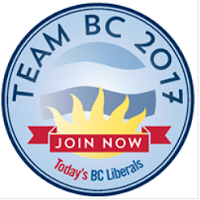 The days have now dwindled down to six for Liberal candidates Herb Pond and Rodney Proskiw to lay the ground work to collect votes to claim the North Coast nomination for this Spring's Provincial election.

The two candidates have put in motion their homestretch push to secure the support of delegates, taking on a more expanded social media approach to get the word out as nomination day nears.

Both Mr. Pond and Mr. Proskiw have offered up a bit more background to their campaigns for the delegates, providing some additions to their both their personal notes, as well as areas of potential policy for delegates to consider as they prepare to cast their votes on January 21st.

Herb Pond, has taken on a three level approach to message delivery, making use of a website and Facebook page, as well as some occasional notes posted to a twitter feed set up to offer updates on his campaign moves.

Three areas of community engagement mark his presentation, that of his passion for community, his experience and the results he achieved while in public office as Mayor of Prince Rupert.

In amongst some of his campaign material Mr. Pond calls attention to his work towards such economic initiatives as the Fairview Container Terminal and the Northland Cruise Dock.

A reference perhaps his time as Mayor and part of the support team assembled in the community at the time by the Prince Rupert Port Corporation to move those investments forward.

In addition to his time in municipal office, he also offers up for consideration the list of community boards and organizations that he has worked with over his years on the North Coast.

Mr. Pond also notes his involvement with First Nations around the North Coast, including a mention of his adoption by the Lasxgilk (Eagle Clan).

The main message for delegates however explores the current economic situation in the region and the need to work  with local government and First Nations to bring investment to the North Coast.

People and communities on the North Coast are falling behind while the rest of B.C. thrives. Our infrastructure is aging. Our population is shrinking. Our stores and schools are being left vacant while public services suffer. And I am being asked to help.  ​

As mayor during challenging economic times, I led a team that put the Prince Rupert on the government's radar in Victoria. I worked tirelessly to attract investments for the Fairview Container Terminal and Northland Cruise Dock. I successfully advocated for a new college campus, Acropolis manor, and women's shelter. Now I'm prepared to take that experience to the next level.  ​

As MLA, I'll work with local governments and First Nations to put the North Coast back on the map to secure new investments. It's time for better jobs, more services, and greater resources for education, healthcare and environment. We need an MLA to be part of the solution, not in opposition. Please join me, and together, we can build a better North Coast for everyone.

The former mayor also expands on the them of representation for the North Coast, posting a letter to delegates on his Facebook page which offers up a mention of the work of current MLA Jennifer Rice.

His commentary for those set to make their nomination choice explores how neighbouring communities and First Nations have elected leaders who are working hard to secure significant investments in the region, efforts he notes offer hope for economic revival and chance to share in the prosperity across the province.

Mr Pond notes for delegates how in his opinion that, the current MLA stands in direct opposition to the efforts of those municipal and First Nations leaders.

The need for change is also one that is found from the message delivery from candidate Rodney Proskiw, who recently took out a full page advertisement in the local paper and has also created a Facebook Page to deliver his issues and items of note to the North Coast delegates.

He also calls out for the need for a Fresh face on the political scene to represent the North Coast, and includes a video presentation that introduces some of his past efforts in the community and addresses a range of themes for delegates to consider as they look to put in place a Liberal candidate for the election.

His thumbnail biography, much like Mr. Pond's makes note of his family life, employment and community involvement on the North Coast.

On the political themes he offers up his candidacy as a chance to take votes away from the current MLA and provide an alternative to the NDP message in the riding.

"To be successful in the next election, it's imperative that we field a candidate who has the ability to win votes away from the NDP, and who can present an attractive alternative to the NDP. I will work tirelessly to bring new votes to our party, votes that only a candidate with a background of being self-employed and successful can bring.

The decision to seek this nomination was not made lightly, It is not a matter of convenience, or wanting a job, or wanting notoriety. It is a decision to reach out and help all North Coast residents realize the potential that exists. This is my way to give back for all the wonderful opportunities that the North Coast has given to me and my family."

You can track these final days towards the nomination meeting of Saturday through the North Coast Liberal Facebook page here.

For more items on the preparations for the Spring vote both in the North Coast and neighbouring Skeena riding see our North Coast Votes 2017 archive page here.