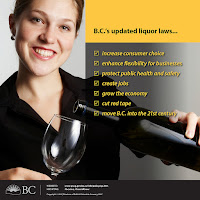 The prospect of more options for customers is the focal point for new liquor control and licencing laws that will take effect today, a loosening of regulations that at some point could see alcoholic beverages available in some rather unusual locations.

The updates to the Liquor Control and Licencing Act come as a result of Legislative change stemming from 73 recommendations received by the Provincial Government, designed to increase flexibility for business owners, reduce red tape and offer more choice for consumers.

Some of the areas that will see some change include:

The potential for all types of businesses, like barbershops, salons, book stores and art galleries, to apply for a liquor licence, giving them opportunities to generate new revenue. As well, Theatres, if they wish, will be allowed to permit customers to consume liquor purchased on-site in both the lobby and licensed seating areas when minors are present, similar to arenas and stadiums

Streamlining regulations so Businesses can apply for a Special Event Permit, formerly a Special Occasion Licence, to reduce red tape involved in organizing events and festivals

Those that own restaurants or bars also have more freedom as of today.

Licensed facilities will also be able to make better use of available space for non-alcohol-related purposes while liquor is not being served.

The full list of the changes that take effect today build on previous changes that have been rolled into place over the last year, the full overview of the new era for alcohol consumption can be examined here.

However, while the options for accessing liquor may be increasing, the rules for consumption remain the same, with no change introduced towards the drinking age in the province.

As well, before you go rushing off to see if your local barber or hair salon is slinging Suds in between Snips, keep in mind, that municipalities can still put in motion their own local bylaws to control the growth of venues that can sell alcohol.

Last year, Prince Rupert introduced it's own prohibitions when it comes to the spread of options for the purchase of alcohol, a move that appeared to be designed to ensure that the local grocery stores did not take advantage of the loosened provincial regulations.

Considering their vigilance on that issue, one imagines that the city's elected officials will be keeping a watchful eye on some of the new elements introduced today.

Email ThisBlogThis!Share to TwitterShare to FacebookShare to Pinterest
Labels: New liquor licencing laws in place in BC