The ongoing cold snap and the problems it is causing for the pedestrians of the region was once again on the mind of Councillor Barry Cunningham on Monday night, as he once again spoke to the issue of snow and ice remvoal as part of the final moments of Monday's council session.

Picking up on a theme he introduced at the last session of Council on December 12th, Mr. Cunningham noted that he still had noticed that there are problem areas of the city where ice has built up on sidewalks adjacent to vacant buildings or lots.

He once again pointed to the area around the old Dairy Queen building on McBride, and a number of other vacant lots as areas of particular concern to him, where he observed pedestrians struggling to walk on the sidewalks adjacent.

The Councillor asked if the city had taken the proper steps of communicating the city bylaw requirements to those landlords, whether they be in town, or out of town and what steps are now available for action.

"Are we in a position now to either fine them for not cleaning their sidewalks, because when you walk downtown the first three blocks of downtown are almost impassible and I've watched a differnt  people young and old walking along across from the Credit Union, past the Dairy Queen  by the old car lot area and down by the Inlander and they're dangerous to walk in right now"

Mayor Brain observed for Council that he believed that those correspondences related to the conditions previously noted had been sent out by the city, while City Manager Robert Long also commented on the situation. Noting for council that if the property owners are in violation of the bylaw, the city has steps it can take. Adding that he agreed with the Councillor on the nature of the danger posed by the conditions and how the city would go to the next step.

According to the city website, property owners are expected to attend to any snowfall in the region in by 12 noon, except Sundays or statutory holidays, If they don't and it becomes necessary, the city has the option of doing the work and billing the property owner. 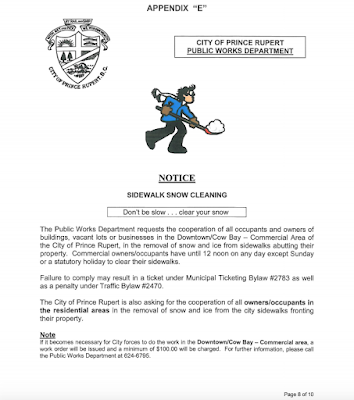 The fact that Mr. Cunningham had to bring the issue up one month after his first note of attention, would however seem to suggest that the city may have been somewhat tardy in taking action on some of the areas in question during the course of the one month of frigid temperatures.

Besides the area outlined by the Councillor, a quick look around town following Mr. Cunningham's comments to council offers up a few other areas that property owners in town have not taken action on as of yet.

Two areas of concern can be found along the Fifth Street area where the sidewalk along the old Shoppers Drug mart building, as well as that which adjoins the empty lot on the way to college have taken on the image of more of an ice flow, than that of a pedestrian walkway, forcing those that are walking to have to venture into the street.

The good news for those that make use of Prince Rupert's sidewalks is that a warming trend is on the way, with nature set to take charge of the situation for the City, as temperatures are set to rise significantly over the next few days. 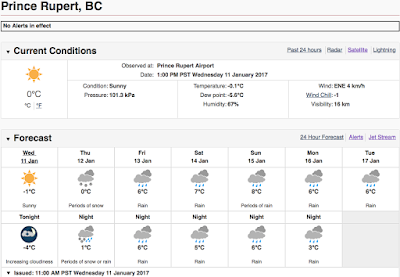 You can review the full discussion on the topic of the city's icy pathways from the City's Video archive it starts at the 37 minute minute mark.

More items from Monday's Council session can be reviewed from our City Council Timeline.

Further background on the work of the city's council members can be found on our Council Discussion Archive page.

Email ThisBlogThis!Share to TwitterShare to FacebookShare to Pinterest
Labels: Sidewalk conditions of concern for Councillor Cunningham