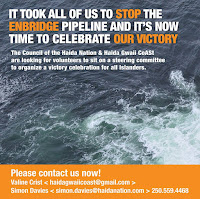 The days of the not so recent past that made up the Enbridge Northern Gateway debate, offered up one of the most controversial issues for much of Northern British Columbia in recent times.

A topic that for a number of years engaged residents from the Western beaches of Haida Gwaii to the Eastern border with Alberta and for many in between, made the North Coast the focal point of the issue of British Columbia's stance when it comes to oil shipments.

The proposed pipeline project from Alberta's oil fields to tidewater at Kitimat was a topic that brought many into the discussion, eager to make their voices heard, and perhaps nowhere was the message delivered more loudly than by those from  Haida Gwaii.

Over the course of the debate over Northern Gateway, the residents of the Islands were among the largest and most passionate participants that were found on the No side of that debate.

Those efforts made for a successful court challenge and with  the decision in November by the Federal Government to not move forward with the Enbridge Northern Gateway project, that political battle has now been won, and with their success the Council of the Haida Nation is now making plans to celebrate those on Haida Gwaii that helped towards that outcome.

Plans are soon to be put into motion to organize a victory celebration for all Islanders and the first step for those plans is to created a steering committee to determine what that celebration will look like.

More background on the project and ways to contact the organizers is available from the Council of the Haida Nation website.

Updates on their plans will also be delivered through that portal as they begin to take shape over the months ahead.

Further items of interest from Haida Gwaii can be found on our archive page here.
Posted by . at 9:21 AM

Email ThisBlogThis!Share to TwitterShare to FacebookShare to Pinterest
Labels: CHN plans for celebration on defeat of Northern Gateway