Whether Prince Rupert students will have one week or two off during Spring break is now the subject of discussion for School District 52 officials, with the District taking some of the conversation to the public by way of a survey now available to the public.

The topic of how long the Spring Break should be proved to be a controversial topic last year, with the School District eventually reversing its early position to limit the annual Spring break to one week.

This year the topic is up for discussion once again, but with a little more lead time to get public feedback. And towards that theme, as part of the consultation process the School District has created two proposed schedules for review.

Considering the passion that was found during last year's discussion, School District officials are most likely hoping that this years discussion will deliver a more measured approach and avoid some of the anger that made for part of the fallout during last years approach to the issue.

In order to gauge the preferences of the public, the School District has created a short survey which asks for participants to make a choice between the two options and offer up any comments that they wish to include for further consideration. 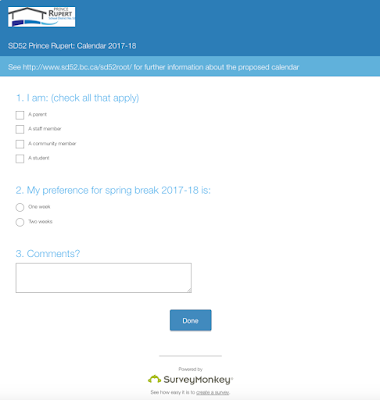 Members of the School District 52 Board will discuss the issue further at upcoming Board meetings to determine the best course of action for the Prince Rupert region.

More items related to education on the North Coast can be found on our archive page here.
Posted by . at 8:43 AM