The unique tastes of the brewers of the Northwest will be on display in Prince George this week as both the Wheelhouse from Prince Rupert and Sherwood Mountain out of Terrace make the trip down Highway 16 to participate in the Third annual Kiwanis Beer festival.

The two representatives from the Northwest are among fifteen that will be part of the sampling bar at the festival, with craft brewers travelling from Vancouver, Victoria, the Okanagan and other areas of the province with their Kegs and special concoctions ready to be showcased.

The Prince George event takes place at the Two Rivers Gallery on January 27th and 28th, and also involves the restaurant community in the city, as well as participants in the arts and music scene.

The volunteer run event is hosted by the Kiwanis Club of Prince George with funds that are raised from the weekend directed towards children's charities and projects in the Prince George area.

The Kiwanis AleFest became an instant success with its introduction of 2015, with the annual gathering expanding both in participation and activities offered, making for what has become a signature Winter event in Prince George. 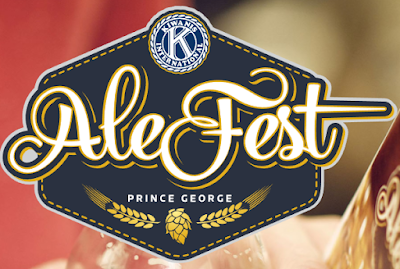 If you're thinking of heading to eastbound over the weekend, you had best hope that you have some connections in the community, the website for this years event notes that Tickets are already SOLD OUT for the 2017 version.

There are however some special free events taking place in the downtown area for those that want to sample some of the offerings as part of the weekend celebrations.

The popularity of the event should prove to be something that brings a smile to the travellers from the Northwest, and maybe an indication that they may need to bring more supplies with them.

With a large and thirsty volume of potential customers ready to sample their products, they'll want make sure to keep the beer lines moving quickly, allowing for satisfied beer aficionados to spread the word once the Festival wraps up on Saturday evening.

More notes on the Northwest Commercial sector can be found on our archive page here.

We'll add to our previews and reviews culled from some of the Prince George media options as the weekend draws closer.