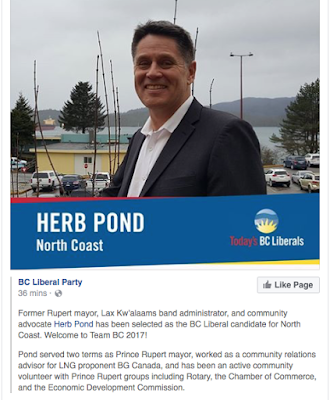 Members of the North Coast Liberal Riding Association have made their choice and a familiar name to North Coast politics will once again take to the political circuit, with Herb Pond receiving the nod from party members on Saturday afternoon and now set to lead local Liberals towards the May election.

The BC Liberal party outlined the successful result of Saturday's vote, with an online Periscope stream cast delivering the news that Mr. Pond had received the largest amount of the votes.

Liberal officials however did not release the vote tally that was recorded as part of Saturday's event which took place at the Highliner Inn.

Following the official announcement, contender Rodney Proskiw spoke first, calling it a good campaign and congratulating Mr. Pond on his success and promising to carry on with his support into the election campaign.

He also thanked his team for their work on his nomination and noted that he was looking forward to celebrating a victory at Mr. Pond's victory party following the election.

For his turn at the microphone, Mr. Pond thanked all those in attendance for their work and took time to congratulate Mr. Proskiw on his campaign, observing that local Liberals are stronger for his efforts, adding that he looked forward to combining forces in the provincial election campaign to come.

The former Mayor of Prince Rupert and veteran of one previous provincial campaign offered up the theme for the Liberals on the day.

That of moving them into the campaign period by urging those in the room to keep a focus on the one common goal that they all share.

"Whatever small differences there are in this room,  even within the team of people that support me I know we don't agree on every issue every time, but they pale by comparison to the view we have, the view we share relative to the people we want to replace.

Rodney said it extremely well, this is not about bashing the NDP it is about making our riding the successful economic strong house that we know it can be, for us and for our children.

Thank you very much, so lets have a little celebration and then let's get to work tomorrow."

The new Liberal candidate made note of the work that lies ahead and issued a call for volunteers for the campaign, asking for help to deliver the Liberal message and vision for Prince Rupert and the North Coast.

You can review the announcement here as it was streamed on Periscope on Saturday afternoon.

You can examine more notes on the election campaigns of the Northwest from our archive page here.
Posted by . at 4:25 PM