Those in Prince Rupert that may have been looking forward to the arrival of marijuana dispensaries in the community may have to temper their enthusiasm for at least a year, as Prince Rupert City Council prepares to explore their options when it comes to the prospect of the Commercial Marijuana Industry coming to town.

The return to work for Prince Rupert Council on Monday will see the city's elected officials wade into the debate on marijuana sales, with Council set to review a report from Hans Seidemann, the city's Manager of Community Development.

The Report for Council for Monday provides some background on the current Federal regulations and the Federal plans to introduce legislation to legalize marijuana in 2017.

The report also explores themes related to any potential impact on the city and how Council may wish to respond to that prospect, providing Council with some notes for further discussion.

Among the major points:

The City is currently protected against the development of commercial retail marijuana operations within the municipality due to the illegality of those operations. However, upon legalization from the federal government, the City's existing zoning and business licensing bylaws would not impose any additional regulations on a commercial marijuana retail or production operations. This could result in marijuana operations becoming established in residential neighbourhoods, or near to schools or substance abuse treatment facilities.

It is not possible for the City to enact fair and effective regulations of commercial marijuana operations within the community without first understanding the Federal and Provincial regulations which may apply.

However in the absence of any regulations, the City faces the risk of marijuana businesses establishing themselves in a manner which does not serve the public interest. Given this, it is recommended that Council adopt the Interim Zoning Amendment Bylaw No. 3408, 2016, which will prohibit all commercial marijuana operations in all zones until January 1st, 2018.

Adoption of this bylaw will protect the City from unregulated development of marijuana businesses in the City, and provide Council and City staff the opportunity to develop fair and effective regulations once the Provincial and Federal regulations for recreational marijuana are introduced.

Council will have their first opportunity to discuss the issue on Monday,  with two options available, the first to move forward with the staff recommendation to put in place the zoning amendment bylaw which in effect would be a one year moratorium on the issue, as well Council will be asked to consider the recommendation to host a Public Hearing on the issue for January 23rd at 7PM.

Council could also decide to receive the report for information purposes, but not act on it at this time.

You can review the full report below (click to enlarge).

It's also available from the City's Agenda Package for Monday, January 9th which is available here.: 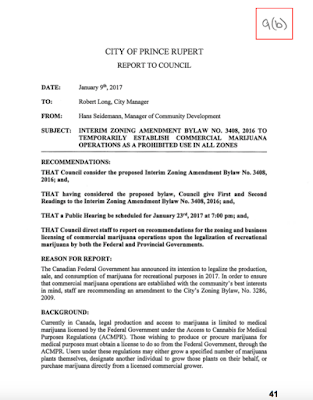 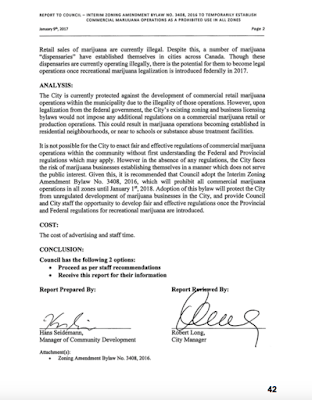 The first option would appear to give the City time to get a lay of the federal legislation and to address the issue further, once more information is available.

To this point no commercial operator has indicated that they have plans to put down roots in the community and the city's moves would be step towards ensuring that the city continues to have some level of control over any potential development in the community, once any Federal legislation is put into effect.

In late 2016, the Northern View featured a story noting that there was some interest expressed last year by The Medicinal Cannabis Resource Centre Inc., a medical marijuana company which has indicated it was looking to open a clinic in the city by the end of 2017.

With Council preparing to return to their duties, we will once again be tracking this year's civic developments from our Council home page here.

More background on items of interest from the City of Prince Rupert can be found here, while we also host an archive of issues and discussions related to City Council sessions here.
Posted by . at 2:48 PM

Email ThisBlogThis!Share to TwitterShare to FacebookShare to Pinterest
Labels: Council to look at Commercial Marijuana issues on Monday