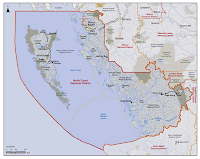 They're almost at the starting line for the 2017 provincial election campaign on the North Coast, with the two main political parties in the province making their plans to move their party membership to action.

Local members of the Liberals and NDP  will soon be looking to take to the streets, hold community gatherings and knock on doors to get out the vote in the May election.

After somewhat of a low key campaign between Mr. Rodney Proskiw and Mr. Herb Pond, BC Liberals expressed their confidence that it will be the familiar face of the former Mayor of Prince Rupert, that will be able to provide the successful challenge to incumbent MLA Jennifer Rice.

As we outlined on the blog on Saturday, Mr. Pond enters the race set to take the various themes of Premier Christy Clark's political blue print to residents across the riding.

Saturday's nomination marks the second time that the Liberals have looked to Mr. Pond to take them to the finish line, they previously campaigned with enthusiasm  for the former Mayor during his bid to topple the NDP's Gary Coons in 2009.

From the remarks of their Saturday nomination meeting, the Liberals will be working to claim the North Coast by focusing on the need to expand on the economic conditions in the region and to increase employment and grow the population base. While no doubt also calling attention to the political efforts of Ms. Rice in Victoria.

Focusing on the work of the current North Coast MLA, offers up an approach that could see the Liberals seeking to create a trail for the voter to follow.

Making note as to how her advocacy on a range of issues at the Legislature, has provided for obstacles when it comes to improving on the economic fortunes for the urban areas of the riding in Prince Rupert and Port Edward. riding.

For the Liberals delivering a message that Ms. Rice has been derelict in her attention to the the area, will be important when it comes to their hopes of claiming as large a swath of the vote that comes out of those two communities.

As well, how Mr. Pond crafts his message for the surrounding First Nation communities in Lax Kw'alaams and Metlakatla will be a be key element when it comes to any desire to wrestle the riding away from the NDP.

Ms. Rice's popularity appears to be strongest on the Central Coast and on Haida Gwaii, two areas of the sprawling North Coast Riding that she has spent a considerable amount of time in over the years, making the concerns of those constituents a priority as she took to her duties at the Legislature.

However, when it comes to Prince Rupert and Port Edward, the NDP MLA may have a little bit of work cut out for her.

Especially when it comes to how people perceive the way that she has allocated her time on the issues of the riding while in Victoria and what plans she may have to offer towards improving the local economy and the creation of jobs in the region.

As the campaign begins to ramp up over the next few months, one approach that the NDP MLA may wish to take on is to keep the focus on the larger provincial issues, reminding voters as to how the Liberals are facing growing questions when it comes to fundraising and questioning the government's progress to deliver on the economic benchmarks for their often mentioned mantra on LNG.

Ms. Rice could raise local concerns related to how the Provincial government has handled issues in such areas as education, health and with struggling local industries such as the fishery. As well, she could tap into the growing awareness in the community when it comes to social and affordable housing themes.

The MLA could also review some of the concerns found in the community when it comes to how the Province addresses and delivers on infrastructure issues for communities, outside of the lead up period to an election cycle.

Those are just a few themes where the NDP could find some success when it comes to campaign issues and talking points against a government that has been in power for as long as the BC Liberals have been.

One wild card in the North Coast campaign to come will be whether any other contenders for the seat in the Legislature step into the political arena.

So far, the Green Party of British Columbia appears to be taking a pass on the North Coast, with the party website noting that there is no candidate in place for the region, nor any indication to this point that they have plans to even seek one.

For Ms. Rice, the current status of a two person race is one that offers a much better path towards retaining her seat.

Should the Green Party reassess their plans, it would most likely have a larger impact on those voters that currently find themselves in the NDP camp on the North Coast. With any entry by the Greens into the political battle setting the scene for a potential split of the current base of voters that support Ms. Rice.

A review of some of the issues raised in the Victoria can be found on our Legislature Archive page.

As the campaign heats up  in British Columbia, you can follow some of the developments across both the North Coast and the Skeena riding from our North Coast Votes Archive page.
Posted by . at 1:19 PM