With WIND WARNING in effect, Northern Expedition Sailings cancelled for the day

Some ongoing adverse weather between the North Coast and Haida Gwaii has resulted in the cancellation of today's sailing for the Northern Expedition, with BC Ferries issuing a Service Notice earlier today.

The vessel was scheduled to depart Prince Rupert at 10 AM with a return trip from Skidegate scheduled for 10 PM Thursday.

Update: The Revised schedule from BC Ferries notes that the next sailing between Haida Gwaii and Prince Rupert will not take place until Monday January 30th, details on those revisions can be found here. 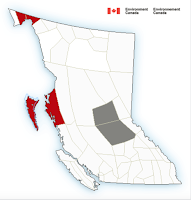 The North Coast and Haida Gwaii are currently under a WIND WARNING with a pacific front set to arrive later today bringing strong winds up to 90 km/h and rain to the Prince Rupert region.

The strong winds are expected to diminish as the weather system moves inland.

A Storm Warning was issued for Hecate Strait earlier this morning, with winds expected to increase to 60 - 65 knots into the evening and overnight period.

Email ThisBlogThis!Share to TwitterShare to FacebookShare to Pinterest
Labels: Ferry Cancellation and Wind Warning for North Coast and Haida Gwaii