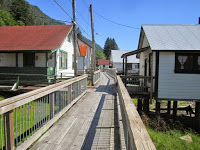 A portion of tonight's Prince Rupert City Council session will find Council members reviewing a request from the Port Edward Historical Society, which is seeking the support of Council for their efforts to have the North Pacific Cannery site declared a World Heritage site.

Council members will have opportunity to review a Correspondence from the District of Port Edward which, as owner of the North Pacific Cannery site is asking for Prince Rupert's support for the quest of the Port Edward Historical Society to have the Cannery Historical Site placed in consideration for the tentative list of UNESCO World Heritage sites.

The letter to council reviews some of the history of the Cannery site and its importance over the century to the region. The Port Edward Historical Society also outlines some of the restoration work that has taken place in recent years, as well as some of the economic benefits that come to the region as the local attraction gains wider review across the province and beyond.

The letter to City Council can be viewed below (click to enlarge) : 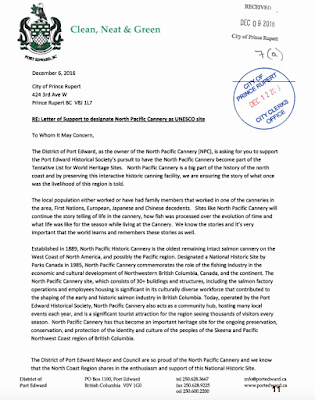 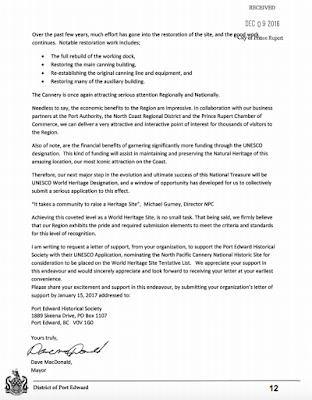 The Port Edward Historical Site notes that should the Cannery Site receive World Heritage designation it would open up new avenues of funding that could assist in maintaining and preserving the heritage of the region's past as presented at the Port Edward site.

Last month, the North Coast Regional District offered up their own letter of support to the efforts of the Port Edward Historical Society, offering up a fair bit of enthusiasm towards the Port Edward request.

It's not the first time that the Cannery site has attempted to secure such designation, you can review some of the background from this blog item off September of 2013, which outlined the efforts of North Pacific Cannery to join the 18 current sites accorded such designation.

In August of 2016, the Federal Environment Minister issued a call for nominations from across the country for potential sites for consideration.

More items of interest on tourism in the Northwest can be found on our archive page here.

While our review the work of Prince Rupert City Council can be found on our Council Discussion page here.

Email ThisBlogThis!Share to TwitterShare to FacebookShare to Pinterest
Labels: Letter of support for North Pacific Quest on UNESCO Heritage designation