Three  Royal Canadian Navy ships have pulled into port, tied up at the Atlin Terminal as part of the Navy's contribution to Seafest weekend.

The ships, three Coastal Defence Class vessels, will spend the weekend alongside the Atlin dock, the sailors set to provide tours of HMCS Whitehorse on both Friday and Saturday from Noon to 4 PM, (the Seafest guide has the ship open for tours on Sunday as well) in addition to showing off their vessels, sailors from the visiting ships will be participating in Saturday's parade, as well as some of the other Seafest activities.

Members of the Fleet Diving Unit Pacific will also be on hand at the Atlin Terminal, providing displays and demonstrating their diving and Explosives Ordinance Disposal equipment. 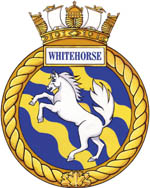 Monday morning, the trio of ships set sail for a number of exercises and other coastal operations off the North Coast until the end of July.  Beyond their local commitment, the squadron will shift its focus to exercises with the US Third Fleet in more southern waters.

For those that may be feeling  regrets that the Navy visit falls during some inclement North Coast weather, don't fret too much for the sailors.

Once their work in Prince Rupert and the North Coast is done, the fleet is off to those southern waters off of California, with perhaps San Diego as their next port call.

A pretty nice consolation prize for the rainy north coast, I'm sure we all would agree!

The full outline of their busy agenda can be found from this media release from the Royal Canadian Navy.

Email ThisBlogThis!Share to TwitterShare to FacebookShare to Pinterest
Labels: Royal Canadian Navy is in port for Seafest