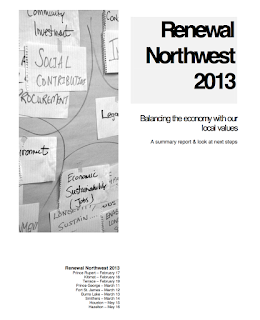 Nathan Cullen, the NDP Member of Parliament for Skeena-Bulkley Valley has released the findings of his three month tour of the riding earlier this year, part of his Renewal Northwest consultations.

As we outlined on the blog in February, The MP held public consultations in a number of Northwest communities from February through to May, seeking input from local residents on a number of economic and environmental concerns across the region.

Among some of the key take aways for the NDP MP and Opposition House Leader, was the need for a Long Term Legacy in the region, moving away from the feast or famine models of the past.

Contributors to his forums also stressed the need for more accountability, a desire to keep job opportunities part of a local approach to any industry in the region and for upcoming projects to provide assistance to help offset the increased use of social services and local infrastructure.

Another key concern was that of the regions First Nations who want any new projects to hold meaningful consultations with First Nations and show respect for the rights of First Nations land and traditional uses.

The desire to protect wildlife, fisheries and the overall environment was another major facet of Cullen's review of the last few months.

The report also provided a focus on a number of items of recent concern across the region, from pipelines to energy projects and the more traditional industries of the Northwest of fishing, forestry and mining.

On pipelines, the report urges that at the least pipelines should be reserved for refined products and not for raw bitumen.

When it comes to energy concerns, the report outlines that an emphasis needs to be put on developing renewable, clean energy that does not compromise the environment.

Many of the conclusions that Mr. Cullen's review of the Renewal Northwest sessions provides for, are perhaps not surprisingly, ones that mirror many of his thoughts over the last few years on industrial development in the region.

Whether in large groups or small, those discussions from February through to May, for the most part have provided for his narrative on the issues of concern.

Though, on some of his points, we imagine some of his critics may suggest that in the end he was probably speaking mainly to NDP partisans and those already converted to his messages.

You can examine the findings and stake out your turf on the issues with a review of the entire report here.
Posted by . at 6:33 AM