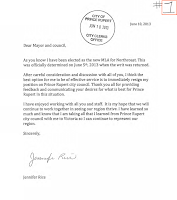 With the resignation of Councillor Jennifer Rice on June 10th (history fans can review that letter by clicking on the letter left), Prince Rupert City Council now has to decide how to move forward with the process regarding her seat on Council.

Towards that decision, Council will hear from the Corporate Administrator Robert Grodecki at tonight's Council meeting.

In the Regular Council session he will outline the direction and process ahead for Council, with a recommendation that Council appoint a Chief Elections Officer on either July 8th, or August 19th of this year.

That would meet the stipulations of the Local Government Act Legislation that calls for an election as soon as reasonably possible after the vacancy occurs. Setting in motion the process of replacing now former Councillor Rice, who was elected the MLA for the North Coast in May's provincial election.

Among the information provided by Mr. Grodecki to council, is an estimate that the cost of holding the by election will be somewhere between $15,000  and $25,000 dollars.

With the introduction of  the By-Election recommendation at tonight's, City staff is seeking further direction from City Council on the issue.

You can review his report to Council from the Regular Council Agenda, it begins on Page 64
Posted by . at 11:24 AM

Email ThisBlogThis!Share to TwitterShare to FacebookShare to Pinterest
Labels: By election prospects for Councillor Rice's seat