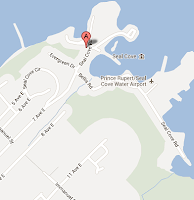 Black smoke billowed high into the east side sky on Wednesday evening, as Prince Rupert Fire Rescue responded to a major fire in the Seal Cove District of the city.

Upon arrival on scene, PRFD units found the North Coast Mini Storage and Warehouse Building fully involved, the smoke from the fire attracting residents from all over the city. Cars lined both Sixth Avenue and Seventh Avenue East and surrounding streets, seeking to gain vantage points to the blaze, which was reported shortly after 9 PM.

Besides the visual beacon, twitter alerted residents to the fire on the east side, tweets quickly serving as indicators to the nights events. 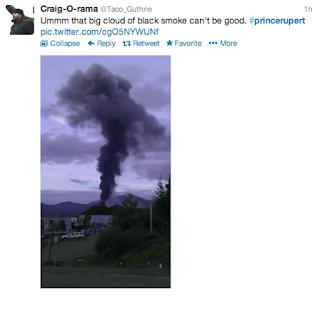 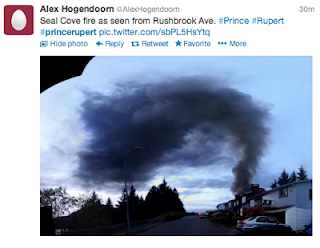 At one point cel service became problematic as residents made calls, took photos and sent data from the fire scene, overloading the city's cellular networks for a brief period of time.

Power was also interrupted in some parts of the East side, the flames reported at times as reaching power lines in the Seal Cove area.

Police units set up a perimeter around the Fire scene, while BC Ambulance units stood ready if required.

BC Hydro and PNG workers also responded to the Fire Scene as the fire expanded.

Prince Rupert Fire Rescue put all its resources towards the fire and appeared to have the fire under control by10:30, no preliminary cause for the fire was immediately revealed, the building however was down to the foundation as the clean up efforts got underway.

Through the evening users of the #princerupert forum on twitter and the local chat forum htmf posted their photos of the Wednesday evening blaze.

Media accounts of Wednesday's fire can be found below:

July 8-- Cause of Prince Rupert mini-storage fire remains unknown
Posted by . at 11:20 PM