Clock ticking down towards possible VIA Rail disruption

Those that use VIA Rail for their travel plans, may wish to start planning possible alternatives as the national passenger rail service faces a 72 hour strike notice.

The Canadian Auto Workers Union served notice on June 4th, reports have the union and VIA Rail setting a strike deadline of midnight on June 14th.

The disruption on the North Coast won't be as dramatic as that in other regions of the nation, service to Prince Rupert is mainly a tourism based offering, the departures and arrivals on every other day for a total of three a week each way to Prince George. 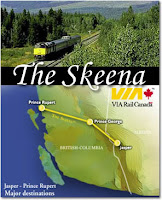 In a press release posted to the CAW website, the union outlined that the strike notice was a result of "frustrations and insecurities that our members feel at VIA". The Union also took issue with the recent modernization plan, which the union suggests isn't providing for much of a modernization plan.

You can read the CAW press release here.

VIA Rail provided this update on the Labour Negotiations as well, offering up "optimism that an agreement might be reached" before that June 14th deadline.

Email ThisBlogThis!Share to TwitterShare to FacebookShare to Pinterest
Labels: CAW serves strike notice on VIA Rail