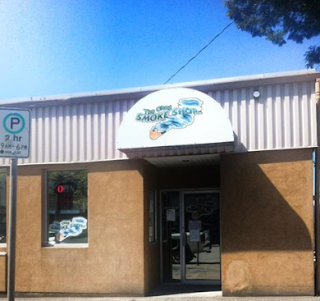 There's one less commercial enterprise operating in the downtown core today, with word of a raid on The Chad Smoke Shop this past weekend.

While most Rupertites were busy taking in the the Seafest activities on Third Avenue through Saturday afternoon. One block over on Second Avenue, members of the Prince Rupert detachment of the RCMP were executing a search and seizure operation at the home of The Chad Smoke Shop.

By the time the RCMP were finished cataloguing the inventory,  thousands of items had been seized from the shop, that after execution of a search warrant, issued after a six month investigation.

The Police operation comes a little bit more than one year after the store first opened in the city, at the time making for an interesting addition to the city's commercial scene.

In fact, it wasn't all that long ago, that the shop was mentioned in passing by the Mayor.  Part of a listing of recent arrivals and an indicator as to the rebound in the commercial sector in the downtown area, which the Mayor linked to port development.

A tip of the hat that perhaps raised a few eyes locally, considering the historical nature of the interest from law enforcement that the shops have raised in other communities where it has located.

At the time, we outlined some of the steps taken in other communities when The Chad Smoke Shop set up shop in their communities, some of which followed the path taken by the RCMP on Saturday.

As the investigation continues, the RCMP is seeking more information regarding the Saturday developments, as well the RCMP advised that they are open to hear concerns, regarding other establishments which may providing the same product line as the recently closed Chad's.

The RCMP outlined for the The Northern View that one person from Alberta had been identified as the owner of the business and may be facing criminal charges, the Northern View had not received any comment from the owners of the store, by the time they posted their story to their website.

The store's facebook page was last updated with an item from May 23rd,  with an invitation for would be customers to "check out our shop" and "browse" the inventory. Something that the RCMP seems to have taken them up on.

We imagine with Saturday's developments, that should the doors ever reopen, stock may be in rather short supply.

Update: With the growing file of media items on the Chad Smoke shop closure, we offer up an archive of developments below:

Update 2:  The RCMP released details of their investigation through a press release issued on Thursday, you can review the details here.

Email ThisBlogThis!Share to TwitterShare to FacebookShare to Pinterest
Labels: RCMP seize items from The Chad Smoke Shop in Prince Rupert