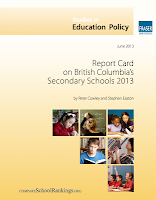 The always controversial Fraser Institute report on Secondary Schools has been released, a ranking of the 282 secondary schools examined by the research group that usually results in much discussion, their findings accepted as gospel by some, heresy by others.

This year's compilation finds Prince Rupert's Charles Hays Secondary listed at 258th place of the 284 reviewed, an overall rating of 4.1 out of 10, which is slightly higher, than the rankings of the last 5 years which had CHSS listed at 3.2

The lengthy report outlines the categories that the Fraser Institute uses to determine its ranking system, as well as where schools across the province stack up against each other by comparison.

The Charles Hays review can be found on page 26 of the download available from the Fraser Institute website.

The breakdown for Charles Hays shows where some progress is apparently being made from past Fraser Institute reviews. 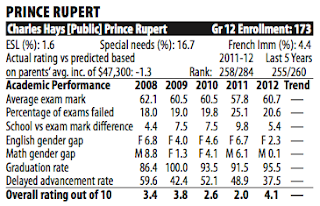 On Academic performance Charles Hays enrolment of 173 students provided the following results from the Fraser institute data. While some will find disappointment at the Prince Rupert showing in this latest report, there are a few positive indicators to review.

(The exams that are used for this category are the provincially mandated exams, not in class exams.)

While the Delayed advancement rate dropped to 37.5 per cent

Northwest Schools had the following overall rankings, you can examine their performance reviews from the Fraser Institute website, the page numbers for each Northwest school are listed on the right.

The listing of the 282 schools surveyed produced a top ten school list heavily weighted towards Vancouver and Victoria, two school scored a perfect ten from the Institute, York House and Crofton House, both in Vancouver.

For many the fact that the public schools are compared to private or Independent Schools is the main point of contention, suggesting an uneven playing field provides for a snapshot that isn't particularly fair.

That's a point that the BCTF and some school administrators in BC make regularly, whenever the Fraser Institute reports are released.

Peter Cowley and Stephen Easton the authors of the report address that topic in their preamble to the report, found here.

Our past review of the Fraser Institute  Elementary report card from March of this year can be found here.

Our archive of developments at School District 52 can be found here.

Below, The media accounts of the Fraser Institute report.

CBC-- Private schools top Fraser Institute rankings
CKWX-- No  BC public high schools in Fraser Institute's Top 10
CKNW-- Lower Mainland schools show drop in performances in latest rankings
Global BC-- 26 secondary schools across BC have improved in ranking
Posted by . at 9:49 AM