The warm and humid weather of the last few days on the North Coast may about to be coming to an end, but not before perhaps a show from Mother Nature.

The Dark and threatening skies to the North and East of Prince Rupert, provided for bursts of Thunder and occasional flashes of Lightning, a somewhat rare event for the coastal portion of the region.

The system began to rattle around the coastal regions of the North Coast around 3:30 PM on Monday afternoon, further inland a Severe Thunderstorm Watch was put into effect by Environment Canada. 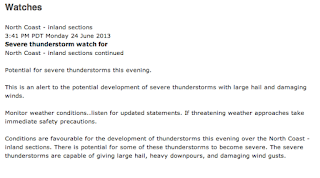 The Watch outlined that conditions are favourable for the development of Thunderstorms on the North Coast Inland regions,  storms capable of providing for large hail, heavy downpours and damaging gusts of wind.

The forecast for Prince Rupert and area calls for periods of rain through Monday night into Tuesday morning,  while Terrace and inland areas could see much in the way of thunder, lightning and rain, as much as 25 mm of it by the time the weather system has moved through the region.