A change in direction at the Vancouver Sun is going to leave a bit of a hole for those that seek out background and information on Education matters in the province, as Janet Steffenhagen, one of the Sun's most impressive and dedicated of journalists departs the Vancouver newspaper.

She along with a number of other high profile Sun journalists has accepted a buy out offer from the Sun, as that paper along with the Vancouver Province seeks to find their place in the changing nature of the newspaper industry.

Ms. Steffenhagen, who was the featured writer for the paper's B. C. Education Report provided a must read part of the Sun's news gathering.

She regularly offered up items of work that were useful to all, whether administrator, teacher, parent or student, providing comprehensive review of developments in British Columbia's educational system, a beat that provided for much in the way of material to work with we imagine.

Especially, when one considers the tumultuous nature at times, of the relationships between Teachers, Administrators, Bureaucrats and politicians.

For the North Coast her work was invaluable, one of the few reporters of southern based media that took the time to not only report on education in Northern British Columbia, but seek out background information, fact check and deliver a comprehensive review on items that could very well have slipped through the cracks if not for her efforts.

Tracy Sherlock is destined to take over the education beat for the paper, no doubt a challenging position considering the nature of the beat.

The shoes are large and in the short term we imagine the coverage may be a little sparse outside of the Sun's more immediate market area, while the new reporter gets up to speed on the many issues surrounding education.

A sample of some of the tributes to her work can be found from twitter this week, as word spread of her pending departure and the changes destined for the newspaper she worked for. 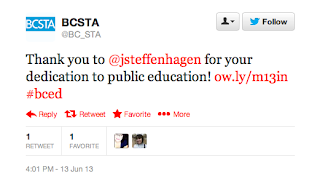 The measure of her work at the Sun is reflected in those comments and many, many more. Highlight her work to as much as an advocate for education, as she was a reporter on a beat.

Her absence from the ongoing debate in British Columbia will be greatly missed. Hopefully, in the not too distant future, we hear word of her new prospects, which with luck will include writing in a public forum once again.

While it's still available, a review of her Education Report will provide a history lesson of items that
dominated the headlines and many that didn't, but perhaps should have.