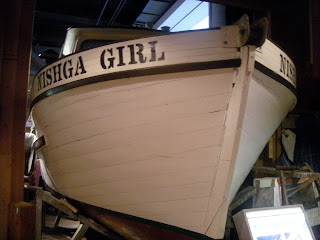 The Nisgha Girl may not be coming home after all, as last minute discussions and letters fly around the nation's capital all over the decision of the Canadian Museum of Civilization to remove the west coast boat from its exhibits.

Jason Kenney, the Federal Minister of Citizenship, immigration and multiculturalism is just the latest to  put forward his thoughts on the topic of the Nisgha Girl, and its safe to say he's not impressed at how it all has been handled.

As we outlined on the blog earlier this month, the Museum of Civilization found itself in the eye of a bit of hurricane over its efforts to reconfigure the nature of the museum, its decision to remove the Nisgha Girl, the most public of controversial decisions in the last few months at the Museum.

Since their announcement, the fall out for the museum has been quick and for the most part has provided for a reaction that has expressed profound disappointment at how the Museum has handled the situation and indeed, even the suggestion of removing the exhibit has provided for a  most robust response from many directions.

The Federal Minister entered the discussion by way of a letter to the Museum's President Mark O'Neill, as Kenney expressed his disappointment at the decision and the nature as to how it all has been handled by the National Capital museum.

Adding more controversy to the Museum's decision is the fact that  as the Minister points out, it comes on the 25th anniversary of the Canadian Government's apology for the Internment of Canadians of Japanese ancestry during the second world war.

While the Federal Government stresses that it does acknowledge the Museum's independence on decisions regarding exhibits, one might suspect that the letter to the museum is somehow a bit of "helpful" advice on the topic.

With the latest development, the saga of the Nishga Girl may yet have one more act.

Museum officials will meet in Winnipeg on July 8th with Chief Harry Nyce and his wife Deanna who donated the boat to the Museum,  attending that meeting as well will be Ken Noma, the President of the National Association of Japanese Canadians. The hope is to come up with what the Museum calls "a mutually satisfactory resolution".

Indications leading up to that meeting might suggest that the boat, which is currently in storage may not make that trip to Prince Rupert after all, as there is apparently some discussion at the moment that may yet find the boat returned to exhibit at the national museum.

The Ottawa Citizen was the first media outlet to break the Nisgha Girl story earlier this month, they follow it up with this update, which highlights the evolving nature of the controversy and points to the possible outcome.

We imagine we will learn more, once that July 8th meeting takes place.

By then perhaps, we'll have a definitive answer as to what port the Nishga Girl will be calling home.

Email ThisBlogThis!Share to TwitterShare to FacebookShare to Pinterest
Labels: Nisgha Girl debate in Ottawa continues on plans to move boat to Prince Rupert may be changed