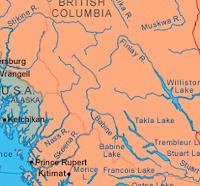 Nathan Cullen, the MP for Skeena-Bulkley Valley is looking to put more strenuous safeguards in place on the Rivers of the Northwest.

In an appearance at Prince Rupert's Rotary Waterfront Park earlier this week, Mr. Cullen put forward his proposal for a Private Member's Bill, that would protect the full lengths of three major rivers of the Northwest, the Skeena, Nass and Stikine.

With the newly elected North Coast MLA Jennifer Rice by his side, Mr. Cullen outlined his concerns over the existing legislation and how he would like to strengthen aspects of it.

Calling the current policy of the Conservative government as misguided, Cullen's Private Members Bill would  put protection of those rivers (and others which Canadians can submit to his website) back into the Navigable Waters Protection Act.
.

The NDP MP and Opposition House Leader highlighted the work done on the Sacred Headwaters of last year as an indication as to what residents of the Northwest could accomplish in their bid to protect the water resources of the region.

The Private Members Bill was submitted just before the House adjourned for the summer, it is now in rotation for debate by MP's later in the parliamentary session.

However, it should be pointed out that Private Members bills regularly appear on the Parliamentary listings, but few ever find their way through the process to be adopted and gain Royal Assent.

Still, the motion to put the bill forward into discussion at Parliament will serve to make the topic one of debate, drawing attention to the concerns of Northwest residents and could provide for further adjustments to the Government's legislation.

You can review more of Mr. Cullen's position on the subject from this press release from his office.